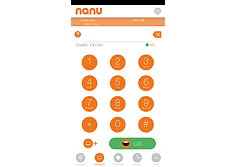 The app's developers said the service offers an alternative to the likes of Skype and Viber, which operate in high bandwidth Wi-Fi, 3G or 4G LTE networks. A Nanu statement read: "As the majority of the world’s mobile phones still use 2G, this means billions of people in rural areas and developing markets will have access to free calls for the first time."

It has initially launched on Android, although nanu's developers said it will be available on other devices "very shortly" and Mac and Windows "soon".

Users can make unlimited calls to anyone anywhere in the world who has installed the app. They will also get a limited number of free minutes to use to call non-nanu users. The company said it will increase the number of free minutes it gives to customers depending on how many people sign up to the app. Consumers pay for the service by listening to an advert that plays over the ringtone when you are dialling a contact.

The company said it will launch a messaging service later this year. Martin Nygate, nanu CEO, commented: "With our low bandwidth VoIP technology and advert sponsored business model, nanu has solved these problems. We are now able to offer completely free calls to everyone, anywhere – even on 2G networks."

Operators need to look beyond VoLTE to justify IMS