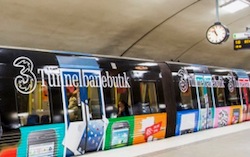 Three Sweden has launched the world’s first NFC marketing campaign to take place on public transport as it looks to drive the technology’s adoption beyond mobile payments.

Together with outdoor media provider Clear Channel and NFC vendor Tapit, the mobile operator has re-branded a Stockholm subway carriage to look like a Three retail store in order to target commuters who might not visit a physical outlet.

In the subway carriage, posters cover the walls, ceiling and windows, advertising Three subscription plans, smartphones and accessories. In order to take advantage of an offer, commuters just have to tap their NFC-enabled smartphones on NFC touch points located around the ads in the carriage.

“We were exploring how to get the online world into the offline world in an easier way and different ways for the traveller to be able to purchase something in the subway,” Three Sweden’s Head of Media Johan Markus told Mobile Europe.

He added that the idea came from Japan, where customers in Tokyo grocery shops click on a screen to select groceries they wanted to buy.

QR codes have been used extensively for marketing throughout Europe to date, but according to Tapit’s EMEA vice president Niklas Bakos, NFC is a more effective tool as data can be garnered instantly to monitor the campaign.

“Before NFC, you had to provide a URL or QR code. QR codes can be troublesome as you have to download a reader, take a photograph, make sure the smartphone recognises the photograph in order to get to the link, but now you can use an NFC touch point to direct you instantly to the information point,” he said. 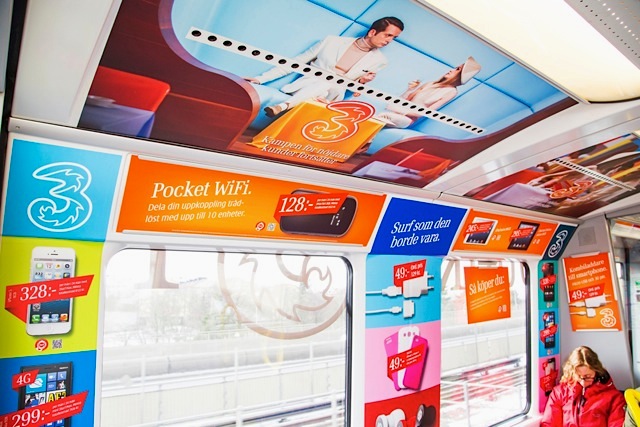 Every touch or tap is controlled by the Tapit platform meaning the company can change the redirect quickly to a new offer.

“We can do everything the mobile internet can do. We know exactly what happens at every touch point and can provide data on which offers were most popular, as well as what type of phone and OS were used to tap the NFC touch point,” added Bakos.

More widely, Three sees NFC as having a lot of potential and work on developing services using NFC is underway (click here to read our feature MWC 2013: NFC might not be dead in the water after all?).

“In Sweden, NFC is just starting to come out, but mobile payments haven't taken off yet. NFC gives you so many more options than making mobile payments. This is just scratching the surface, we see a lot of potential in this. NFC’s going to be used more and more by us in upcoming campaigns,” Markus said.

“There’s still a long way to go before we see NFC being used in supermarkets and to buy tickets on the underground or bus. Big transport companies in Sweden always want to spend a long time to test and try new technology.

“Before they had a service where you could buy tickets via SMS, but now they want to move into doing this with NFC.”

Tapit is glad that more companies are starting to talk about NFC.

“We need the big players to implement NFC in order for this to become a mass-market tool,” said Bakos.

“We want people to be so aware of the technology that they use it twice a day and using these techniques to market to them will be normal.

“Most of our clients have only tried QR codes and it's been on the market for eight years but it doesn't really work and there are too many barriers to entry.”

He added that in recent campaigns just as many people have been using the NFC access points as QR.