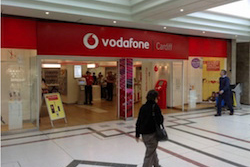 Vodafone will being deploying Fon Wi-Fi to its customers in Spain and Italy in the coming weeks, following a deal with the global Wi-Fi company.

The operator is aiming for more than two million hotspots between both countries by the end of the year. Fon currently boasts more than 14 million customers worldwide.

The service operates by having its customers "share" part of their Wi-Fi connections. Fon modems broadcast two Wi-Fi signals from one source, one encrypted and private and the other public. The latter is password protected and Fon said it guarantees the private connection for its customers.

Spain will become the first market to get the Fon modems rolled out, with the Italy installation to begin next week. Vodafone is aiming to have the initial deployments finished by this summer.

Martin Varsavsky, Founder and CEO of Fon, said: "We are very excited to announce this partnership. Vodafone has been leading innovation in telecommunications for decades now. Working together with Vodafone on their Wi-Fi strategy is a big step forward for Fon and for Wi-Fi overall, which is becoming an integrated part of fixed and mobile communication."

Last week, new figures from the Market Intelligence & consulting Institute revealed 2.27 billion Wi-Fi devices were shipped last year. This was an increase of 18 percent on 2013.

It said by 2019, there will be 3.75 billion Wi-Fi connected devices shipped globally, with the majority of the growth fuelled by the Internet of Things sector.