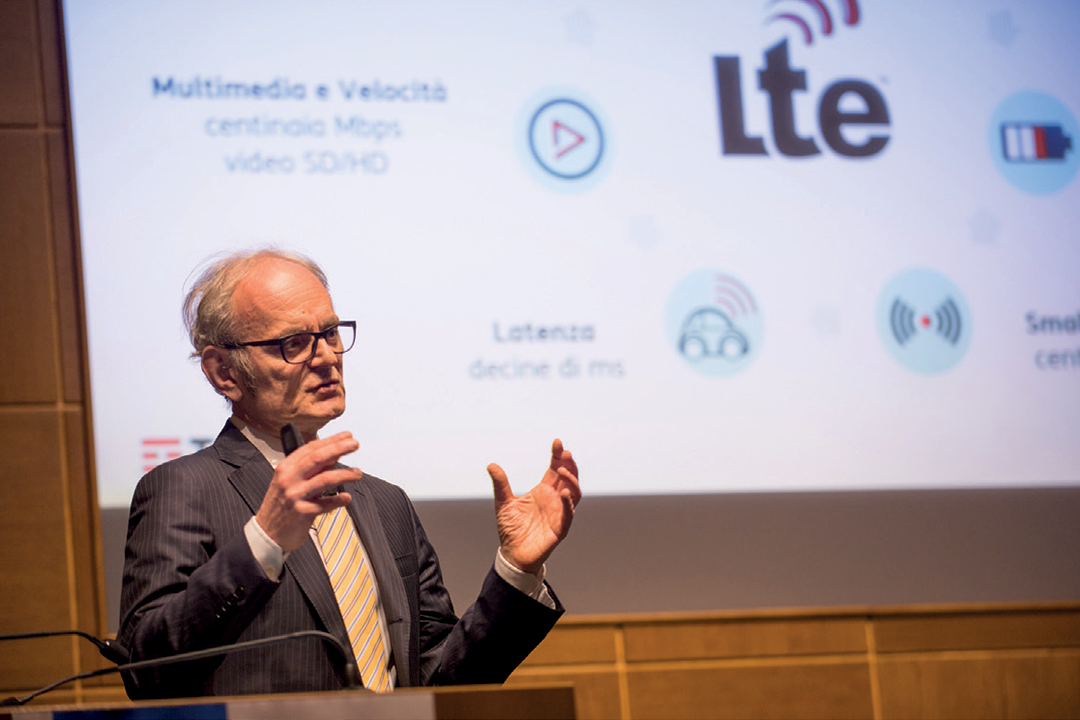 Giovanni Ferigo enthuses about the potential of emerging technology – so long as you can get him off the subjects of football and motorcycles. TIM’s running man CTO talks to Graeme Neill.

Not to let you into any trade secrets but my interview with Giovanni Ferigo, Head of Technology at TIM, quickly bucks the trend of my usual CTO profiling methods. Normally once the fat of a telco’s technology strategy is sufficiently chewed, I turn to the executive’s own life to get a sense of who they are when not neck deep in LTE, 5G or whatever else his or her in-tray holds. This leads to conversations about the attractiveness of Tyrolean cuisine, as in the case of Swisscom’s Elmar Grasser last issue, or a detour into the world of Harry Potter, which happened with Proximus’s Geert Standaert earlier this year.

However, it takes all of five minutes for Ferigo to infectiously start talking football and motorcycles, two of his loves. Hailing from Udinese, he’s been a lifelong fan of the north-east Italian city’s football club, the second oldest in the country and one that boasted legends such as Zico and Dino Zoff. Less auspiciously, the son of former Libyan dictator Muammar Gaddafi also made the team, albeit for one 10 minute substitute appearance during an end of season dead rubber.

Ferigo also enthuses about a visit to September’s Misano MotoGP race in San Marino, coincidentally sponsored by TIM. He says: “It’s incredible to me, to feel the emotion of the competition.” He jokes that his addiction to motorcycle racing is something his wife has come to accept, albeit grudgingly. He says: “It’s a compromise of marriage, I suppose. I accept that I have to visit a lot of shops and she is ok with motorcycle tours.”

Another passion is running. “I like to run eight to 10 kilometres of running each day,” he explains. “I live in a green area and it helps me to arrive in the office with a free mind and go about my day in the right way.” This clear-headedness is required as the operator is buffeted by rows over its ownership and the role, nefarious or no, of majority shareholder Vivendi.

Flavio Cattaneo left his role as TIM CEO this summer after reportedly falling out with Vivendi and he was replaced with a one-time executive from the French company. In between, Italy’s regulator ruled that Vivendi had de facto control over the telco, something strongly denied by the mediaco. TIM confirmed in September that it would go to court to challenge the ruling.

How is this boardroom politicking affecting the role of the technology team? Ferigo says: “At the moment, my responsibility is to upgrade the network in terms of best infrastructure and best services to our customers. I cannot comment on this issue because for me, it’s business as usual.” I try again as it surely must have an impact. “The plan of LTE, 5G, the network, I am managing as usual,” he replies, declining to comment further.

Ferigo describes his approach to technology as trying to “combine the right [balance] of innovation and concrete things”.  He says: “My view of the CTO is getting the right mix of concrete facts to have the best platform for the best services but to push at the same time innovation and always look for new things to insert into this platform... Innovation driven by business.”

Which brings us neatly to 5G. While TIM has plenty of interests outside of home, with a substantial business in Brazil, the operator has been at the forefront of making its home market one of the European pioneers in 5G development. A demo day on November showcased the technology’s potential in powering artificial intelligence, robotics and virtual reality. The cities of Bari and Matera will host trials of pre-standard 5G in the middle of next year, with TIM working with Swisscom subsidiary Fastweb, Ericsson and Huawei on the research.

Bari will host trials on how connectivity can improve security and logistics in the city’s shipping port. At Matera, connectivity’s role within tourism will be explored ahead of the city’s tenure as 2019 European Capital of Culture.

“In the first phase we will experiment sharing of network infrastructure and platforms,” Ferigo says. “In the late phase, based on the availability of the standards and technical solutions, we will test scenarios with [TIM and Fastweb] sharing parts of the spectrum allocated for the 5G trial. Possible use cases could be, for example, spectrum allocation based on daily traffic profiles and forecasts, special events etc.

“This would give us important feedback on the maturity of spectrum sharing techniques and evaluate their adoption in case the spectrum allocation policy will require it.”

Other use cases that excite Ferigo are cloud robotics and drones, the latter using the mobile network to send high quality images and video and handle the likes of security. He says operators could potentially use machine learning so the drone can autonomously respond to unpredictable situations.

The cost of intelligent networking

Ferigo also wants to bring this automated intelligence into TIM’s own network. The operator is currently trialling bots and how they can deal with customer service issues. He says: “The customer will interact with a bot that will recognise him, his necessities, his profile and our vision is it will be able to try and solve his problem automatically.”

Its own virtualisation plans are well underway (and outlined in more details in pages 28) and Ferigo is also looking to use more intelligent networks to anticipate and deal with problems before they occur. He says: “[With] algorithms we can not only be reactive in terms of things that happen but also be able to run predictive scenarios that mean we can upgrade the network and avoid some problems.”

He says defining efficiencies not only across quality of service but delivering quality of capex is something that has “very, very interesting potential” for TIM. He describes these technologies as central to its network transformation. But while there is near consensus that change is essential, talk of automation and its effects on jobs is something that troubles industries the world over. How concerned is Ferigo about how this change would affect staff at TIM?

“The network transformation that is necessary will cause a transformation in skills,” he says. “At the moment we work in silos, between the designer, the developer, the engineer. With this new kind of architecture, the same person will have all of those skills.

“We have to improve and provide a lot of new skills. I would be afraid for the “old” professions but I am sure the people will be able to transform themselves. There are a lot of new opportunities.

“There are a lot of other things that right now we are not managing. For example, data analytics or within virtualisation, there is the need for storage engineering, capacity engineering, [or] teams needed for orchestrators, hypervisors.

“I don’t think the number of vacancies will improve but there is a huge quantity of people that will help the business, not just technical people but technical businesspeople.”

He says it is the duty for operator HR teams to put plans in place to upskill staff today, but rightly notes this is also a problem for vendors.

Ferigo is not just focused on the era of 5G; across Italy work is underway on the 4.5G technologies that will bridge the current generation with the next. He describes NB-IoT in particular as a “paradigm shift” for the industry in terms of the doors it can open.

TIM switched on a NB-IoT network covering 5,000 municipalities in October, with LTE-M following next year according to customer demand. Ferigo rattles off the use cases that he says the operator is already getting asked for, from smart parking, connected cars and insurance to the luxury industry using sensors that guarantee the originality of their products. He adds: “Let me give you a simpatico example - connected bicycles. You can organise your trip in the city depending on where the smog isn’t. This is a concrete and simple example.”

Another area is one very important to Italians and gourmands all over the globe: food. He says the technology could be useful to identify the origins of that all-important cheese, wine and oil: “It can be used in smart agriculture to monitor crops, herds and flocks, to check for example the health status of livestock, their position, their productivity level.

“But it can also be used to monitor the whole supply chain, which is particularly important for those goods that need particular care in terms of time to be delivered...exposure to heat or sun radiation and so on.

“Dairy products are a good example for sure, but also meat or other delicate production: there are already companies that provide this kind of solution for luxury wine for example.”

While the ARPU is low per sensor, Ferigo says the Internet of Things affords operators “millions of possibilities” and places it at the centre of 4.5G, a term that has also been used by operators to span gigabit LTE, virtualisation and other kinds of tech. More importantly for Ferigo, it allows operators to get to grips today with technologies that will be widespread tomorrow. He says: “I always say the 4.5G network is one that permits you to connect objects and not just humans... the applications are not so dependent on latency but with 5G, the business cases will be more latency-intensive. It’s the right bridge to understand in a concrete way how 5G will enable different kinds of services.”

This bridge to 5G comes in addition to ongoing work in improving the performance of its LTE network, a now seemingly forgotten part of a CTO’s role. TIM is aiming for 98 percent population coverage outdoors by the end of the year and Ferigo says work is ongoing to fill the gaps of indoor coverage, which lags behind.

Small cells will be deployed for special areas such as stadiums, shopping centres, hospitals and transport hubs, “areas critical for strong concentration of traffic and coverage issues”, he says.

Some 2,000 small cells will also be deployed outside next year as TIM turns its attention to geographical coverage, especially in areas where macro coverage proves too difficult. These will centre on some of Italy’s historic centres or areas limited by architectural or electromagnetic constraints.

Ferigo says the challenge for making this deployment is ensuring the small cell network is fully coordinated with the macrocell layer, ideally through a cloud-RAN that can enable both LTE-Advanced and manage interference. He says small cells’ role within 5G, in addition to virtualised architecture, means this will also be a longer term focus.

He is expecting 3G will be used to fuel its LTE network. The short-term plan is to refarm TIM’s 2.1GHz holding for LTE and keep 900MHz for 3G voice. He notes the company will need to overcome challenges related to those customers that have 3G-only handsets and to MVNO agreements that offer 3G-only connectivity. In the longer term, its customer service department can help migrate TIM’s base onto VoLTE, freeing up 900MHz completely. With fresh spectrum coming in forthcoming auctions, Ferigo is unconcerned about supply. The operator is also tapping into licence assisted access technology that uses unlicensed spectrum, with plans to roll it out to 10 major cities across Italy, but Ferigo notes there are only a few compatible handsets.

Whether it’s LAA, small cells, the IoT or 5G, it is clear that the TIM CTO is one of many European enthusiasts about the promise of emerging technology. But amid all his talk of what technology can bring to Italian society, surely there’s one particular use case that excites him. How excited is he about the prospect of a truly connected motorcycle? “This is my dream,” he replies, laughing.