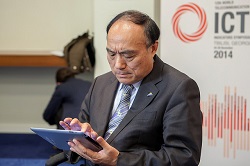 Almost 150 years ago, the International Telecommunications Union was formed after years of discussions about standards and barriers to entry, showing the same debates that dominate the industry today existed in the time of steam.

Back then, the ITU was concerned with issues surrounding the fast growing telegraph market, with the 'T' not standing for telecommunications until 1934.

Next year, it celebrates its 150th birthday and it is a date that coincides with potentially its most important conference thus far.

Mobile operators are anxious for more bandwidth, not only to fuel booming smartphone and tablet usage on LTE networks, but also to anticipate the Internet of Things sector.

The problem is that other organisations, including broadcasters and potentially digital players such as Google and Facebook too, have their eyes on the same spectrum.

Participants will sit down in Geneva next November to thrash out the issues at the World Radiocommunication Conference.

The ITU, which allocates spectrum and determines which industries can use which bands, has a delicate line to walk in order to try and force a consensus upon its members.

Houlin Zhao, Deputy Secretary-General of the ITU [pictured above] and the man who will step into the top role at the start of next year, agrees when asked if next year's conference is its most important ever.

He says: "Its success will shape our global family for the next decade. It will affect the whole industry and the building of new technology. Today there's nothing we can expect as an innovation that will not use spectrum."

Zhao has sympathy with the telecoms industry as it anxiously tries to find long-term profitably in a time of digital innovation using their networks without contributing to them.

He says: "We have an investment problem because we see strong competition among operators and rapid development of new technology and more sophisticated infrastructure. We need to find investment somewhere. Profits are not as evident as they were 10 years ago. How can we convince people to invest in any particular telecoms business?"

According to Zhao, the industry suffers from what he calls a "crazy" regulatory framework. He cites the 3G auction in the UK, which raised more than €20 billion for the public purse, as the most egregious example and said operators are being doubly hit by being charged for the resource and then facing high infrastructure costs to deploy spectrum.

Zhao says: "If the government makes money from the auction, they should do something to benefit the country. A portion should be given back to the industry so they could use this capital to develop their businesses further."

He believes governments could also be clearer on the potential for shared spectrum, a subject that was tackled in a recent Westminster Forums debate.

Zhao says it could serve as a temporary connectivity solution for public sector organisations, to give one example, but clear guidance needs to be in place to stress exactly who will be able to use this spectrum and how long for.

Next year's conference will be given added spice by the expected attendance of Silicon Valley’s finest. Google’s interest comes off the back of its Loon project, which aims to use hot-air balloons to connect those in developing countries or remote regions.

Facebook is looking to do a similar thing but with drones. While neither are fully paid up members of the ITU, Zhao says their attendance shows just how the landscape is changing.

Given how high the stakes are and how feverish the demand for spectrum is, how likely is an agreement?

Zhao says there has to be agreement, adding that because major technological innovations are now happening every five years, consensus is needed to allow companies to take advantage of them.

He says: "If the 2015 WRC concludes with some of the main issues outstanding, they will have to wait until the WRC 2019. This puts pressure to force the participants to reach an agreement. In four years there will be further issues we have to tackle and that includes the likes of 5G."

Zhao is confident a deal will be struck. But he says: "Things won't just get solved with official meetings. We have to be able to negotiate offline."

In order to bring about the next generation of connectivity, sometimes the oldest methods of communication can still be the best.