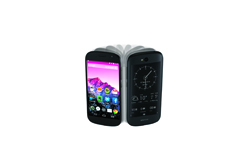 One could argue that there aren’t many more places you can go with a smartphone in the current age of QHD displays and octa-core chips, but YotaPhone is hoping it can offer something different.

After all, the maxim that innovation has peaked was the widely held belief before the advent of the iPhone, which was nothing short of a revolution for the handset market.

Since then, the industry has seen a slow and steady upward climb, and while it’s witnessed better displays, improved battery and more powerful processors, nothing has quite come close to turning it on its head as Apple did some seven years ago.

Yota Devices appears to be looking to pick up the mantle, however. This week the Russia-based company launched the YotaPhone 2, the second iteration of its dual-display device featuring a standard AMOLED affair in addition to an “always on” rear-facing e-paper screen providing notifications, weather conditions and other information.

Jens-Uwe Theumer, MD and Vice President of Yota Devices EMEA, explains: “What we’re trying to do is refine the user experience from scratch. There are fundamental issues with the way phones behave today. One is very obvious - if you put a phone on a table, it simply tells you nothing. It’s basically turning us, as the user, into a slave, because we have to turn on the device to dig out information.”

According to the company, the benefits of the YotaPhone 2 are multiple. Not only does it allow users to keep vital information on display at all times, but it also improves battery life by negating the need to unlock the phone to view such info, in addition to offering a better e-reading experience.

There’s no doubt it is a unique specimen. The fact that you can run virtually any Android app through its e-paper display (EPD) makes it useful for running battery-intensive programmes such as music streaming services, where a full-colour interface is unnecessary. Yota has also included a feature called “YotaSnap”, which lets users grab crucial info such as a maps or boarding passes and hold it on the EPD, even after the phone’s battery dies.

The engineering behind the handset is also of note. Yota explained that the heat-sensitive nature of e-paper means special construction methods were required to ensure that heat from the handset’s quad-core Snapdragon SoC didn’t interfere with its headline feature.

What this inevitably means, however, is that sourcing and production costs are higher for the YotaPhone 2 than they would be for a similar device in its spec bracket. Theumer explains: “As you can imagine, if you put a second screen on a device it adds to the price. We don’t go into specifics of how much that might be - it’s hard to actually tell because there’s a lot of innovative technology that we had to invent.”

The knock-on effect of this is a retail price of £555/ €699, outweighing flagships from Samsung, Sony and HTC. This means Yota has to convince buyers the second screen brings added function and value, rather than being a gimmick.

Sharif Sakr, Vice President of Product Strategy at Yota, points to how it has opened up its SDK to developers as proof its EPD is something the company is standing behind. “When it comes to making the most of this display, we need optimised software. That’s why we have an SDK and ask app developers to investigate using it to add widgets and EPD functionality to their app,” he explains.

“Some of the developers out there will see the launch of the YotaPhone 2 and say ‘I know how this could work and how I could improve it’, and all they have to do then is grab the SDK and implement it. We have a lot of partnerships already -  Texter, Mantano, XE, AccuWeather and Twitter. These guys have seen the benefit and jumped on and there’s room for many more.”

However, there is scepticism surrounding whether the device will catch on. Susana Santos, Research Analyst for Mobile Devices at IDC, says: “The performance of the first Yota device was not impressive and even if this time the company claims it will educate sales people and will invest in marketing, I don't believe it will significantly improve its performance.

“Users are not familiar with the interface and in a store there is not much time to explain a different user experience to the customer. Unless it is very easy to use, users need to take time to adapt to this new user experience. Also, nowadays competition has been able to improve battery life and screens for outdoor usage. A year ago the Yotaphone made more sense than it does [today].”

Ultimately, the key to YotaPhone’s success lies in making its offering something consumers need, not just something tacked on for the sake of differentiation. There’s little denying the company has a unique selling point to push, but its biggest challenge now is building on that to make it something that truly commands the desire of users. Unique apps are a start, but Yota’s unique functionality will need to go beyond this.

When it comes to future plans, Sakr says he can’t discuss the company’s roadmap, but offers the following titbit: “We’re a device company, but we’re also an R&D company, because there’s no-one else doing this. Other companies have tried putting an e-ink display back to back with a traditional display, and they haven’t managed it. We have, and we’ve patented the way we do it.

“Do we intend to stay a multi-display company? Most definitely. Are there huge opportunities in that? I certainly think so.”

As for tablets and wearables? “I can’t confirm either way, but your thoughts make complete sense, because there’s so much you can do with this.”