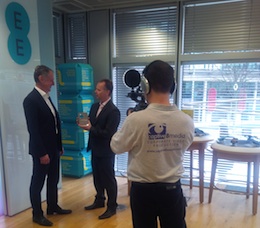 The upcoming takeover of UK operator EE by BT will not affect its technology strategy, its CTO has said, describing the acquisition as a common sense move for all players.

Karonis sat down with Mobile Europe Editor Graeme Neil to discuss the new types of technology it is looking to implement across its network after being unveiled as the CTO of the Year this week.

He said he wanted innovation to "kick in for a second time", with plans to extend connectivity to remote regions.

Despite fears a takeover by BT could derail its expansive 4G plans, Karonis said the takeover would build upon work already carried out by the operator.

Karonis was unanimously voted CTO of the Year by an independent judging panel who lauded his rapid rollout of 4G. EE has the largest LTE subscriber base across Europe, despite a later start than its peers.