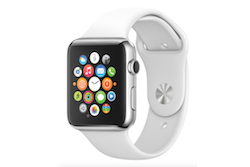 Apple’s foray into the wearables market has been a long time coming but, while the Apple Watch is set to instigate a new age of devices, for now it simply marks another evolution of an industry struggling to meet a more urgent requirement.

That’s not to say that its aspirations aren’t wide-reaching: the device (much like myriad other smartwatches) is packed with fitness-tracking capabilities aiming to drive users from their seats and adopt a more healthy lifestyle. Meanwhile, baked-in Apple Pay will help serve as a launch pad for Cupertino’s m-payments offering in Europe when the Watch arrives on the continent on April 24.

No doubt Apple Watch will also prove an instrumental tool in Apple’s ResearchKit initiative, which introduces a new open-source framework allowing medical workers to gather more accurate patient data for personalised m-healthcare. Still, this doesn’t avoid the fact that Apple Watch is just another smartwatch. Though it’s too early to say whether this will change with time, the device has yet to provide any more clarity on where the market is headed.

Francisco Jeronimo, Research Director at market research firm IDC, says: “The entire smartwatch industry was waiting for Apple to show how disruptive these devices could be in the future, and drive awareness to the category.

“However, what Apple has shown today was basically the reasons why their Watch is by far the best product to date in terms of innovation, materials, usability and applications that really matter to users. They haven’t shown why this category will disrupt our lives, and why it is important, apart from being an extension [to iPhones].

“Like other players in the wearables industry, Apple does not really know what problems smartwatches will solve until millions of users start wearing them.”

“One thing that is very consequential for operators in general is [whether] they have something to add above and beyond iOS and Android OS that users will actually need some connectivity for. It seems that with most of these devices, just good Wi-Fi connectivity or Bluetooth is enough to break dependence with the operator.”

Yet amongst the rabble of Mobile World Congress were stirrings that suggested telcos are beginning to feel out footholds in this multi-billion euro market.

Telefónica, for example, introduced kids’ smartwatch Filip to Europe after partnering with its creator. Featuring a no-frills black-and-white screen and chunky design, Filip couldn’t be further from Apple Watch at first glance; the device is marketed primarily as a smart locator, allowing parents to keep tabs on their children using a blend of GPS, GSM & Wi-Fi. Meanwhile, the child in question can store and call up to three contacts on the watch and send a distress call to them in case of an emergency.

Yet Filip claims to do something that Apple Watch does not. Jesus Alberta, Global Head of Families and Convergence Value Proposition at Telefónica, says: “I think the key thing for the wearable is that you need some kind of customer need that is sustainable with time [and] something that is needed continuously, not just in the first month."

He also points to the further disadvantage with some wearables, in that those that rely on smartphone connections often only provide limited information.

Alberta says that Filip is also important in that it forms a piece of Telefónica’s wider product ecosystem. “We’re interested in developing the families space,” he says. “Families cover many things. We have been working on the connected home and connected cars, data sharing plans, so we’re starting to think about the holistic view of the families. This is another step.

“Kids are a key part of the families, so we need to introduce them to the technology and communications in a safe mode, that’s not bringing all the power of a smartphone [while] also giving some peace of mind to parents.”

Meanwhile, operators increasingly acknowledge they need to include wearables to meet their visions for the Internet of Things. Jonathan Peachy, CEO of Filip, says: “I think the mobile operators realise that there’s a huge opportunity in IoT: connected devices, devices having IP addresses and eventually having some sort of connectivity.

While device makers and operators adopt different approaches to wearables, telcos will need to speak with a louder voice if they want a bigger say in were the industry is headed. If Telefónica’s push is anything to go by, we may be beginning to see the start of this.​