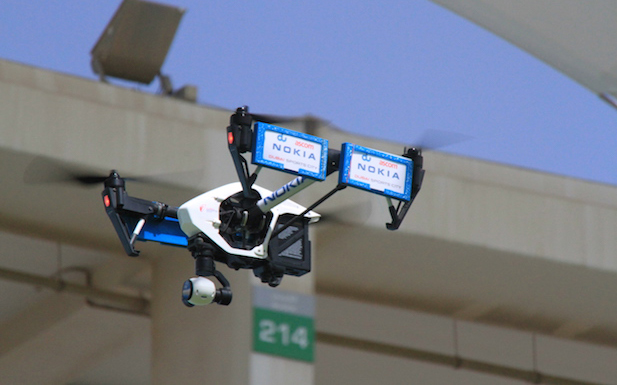 It was only 18 months ago that Amazon was widely derided for announcing it would use drones to deliver products.

What seemed like a publicity stunt at the time has gained more credence since, with telecoms the latest industry to turn to these flying machines.

In March, T-Mobile in the Netherlands was the first European operator to use the technology to test its hardware in FC Utrecht's stadium.

Ericsson and Cosmote in Greece, and Nokia Networks and du in the Middle East, have also given them a go.

Samir Kumar, Head of Services, Middle East, Nokia Networks, says drones were one way of solving the complex mix of different technology that features in an average mast.

He tells Mobile Europe: "With multiple frequencies and small cells, some operators are managing a daunting 10 or even more layers of network complexity. But while complexity has increased exponentially, maintenance budgets remain tight."

At Ericsson, Paolo Paganin, Head of Field Services for the Mediterranean, says drones can also solve the issue of quick site access, as well as the discrepancy between the different types of technology along a tower.

He says: "We have much of the lower power consumption equipment on the ground and more power consuming equipment up on the tower top, which makes it more challenging to swap out."

Drones have several advantages over a traditional human network inspection. There is the safety element, as they can reach areas engineers cannot.

There is also speed. Nokia's Kumar notes that during a recent trial at Dubai International Stadium, drones covered a distance of 3.25 kilometres by travelling at 9km per hour.

Ericsson is going further with automation, with the vendor exploring how robotics can help with network maintenance. Paganin says: "Multicopters will soon likely be used in a lot of areas like network maintenance and network build. There are also trials ongoing with robots mounted to a Multicopter to be able to execute other type of work."

Does this mean robots could completely replace engineers?

Dimitris Mavrakis, Principal Analyst, Intelligent Networks at Ovum, says: "They are likely to be commonly used but not as much as media expects. They are likely to be used in extreme cases, where inspection is either dangerous or requires some other complicated means. If drones become more powerful, with more battery life and range, their use is likely to be extend in the mobile network."

Paganin also suggests this is somewhat hasty. "If we can keep [engineers] on the ground for a larger portion of their time by using flying cameras to reduce time spent at height or to eliminate the need to climb that tower, that is beneficial, and that is our goal. When it comes to turning bolts and connecting cables at the tower top, we will still have people doing that, at least in the foreseeable future.”

Kumar agrees, adding: "At this time we see drones as complementing the work of network engineers, freeing up time for them to perform more complicated analysis and maintenance tasks. Clearly there is still some way to go before drones becomes commonplace; the future possibilities are still to be imagined and implemented."

Mavrakis also points out the difficulties with dealing with legacy infrastructure. He says: "Replacing [engineers] with drones may be a disruptive process if they are to be used in a large scale. However, we don’t expect them to be used. Other practical problems (battery life, range etc) are likely to limit their use, but they can certainly provide value in extreme cases."

Despite Nokia and Ericsson intending to broaden the use of the tech, there are still various regulatory hurdles that need to be overcome, and these can differ from region to region.

Both vendors reject the gimmicky tag that has been placed on drone technology.

According to Paganin, the technology has become sophisticated in a very short period of time, so usage will only go in one direction.

He says: "Flying cameras are simply sophisticated tools. They don’t replace trained staff, but they can help trained staff to perform their task in a different perspective. They represent an evolutional step in network deployment and maintenance."

In short, keep watching the skies.