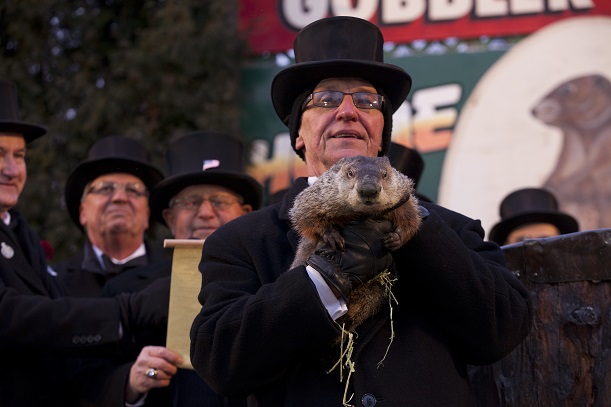 It was with great excitement that the tech industry celebrated its annual Groundhog Day this week. Punxsutawney Phil Schiller comes out of Cupertino, wrinkles up his little nose and tells us (with the help of his boss Tim Cook) what iPads and iPhones we will get this year.

The changes to the devices are smart but broadly minimal and are greeted with either whooping adulation, or cynical dismissal, usually via the form of homages to classic Bill Murray movies. Then Apple reports yet another record quarter of sales and profits and we come back again next year.

So did we end up with? A pencil! A pencil for the new iPad Pro, a typical no-brainer from Apple, targeting businesses with a large scale tablet with its usual stellar levels of aplomb. Its touch-sensitive iPhones, with improved cameras, 4K ready video and LTE-A compatibility will clearly sell in its millions. Again. See you next year!

Now that Apple is making in-roads with Apple Pay, Google has finally gone live with its latest attempt to crack mobile payments. Android Pay, effectively a rebadged version of its failed Google Wallet initiative, can be used in more than one million stores across the United States, storing loyalty and gift cards in the same app.

How successful it will be is another matter. Apple has been somewhat cagey with regard to how often Apple Pay is used. The world of mobile payments from operators is a wasteland of missed opportunities and poorly executed services. Given Apple and Google’s longstanding success of helping consumers adapt to new tech and services, it would be safe to predict they will be better than operators. But mobile payments have not yet convinced.

In a week when Samsung was forced to deny it was cutting 10 percent of its staff because of longstanding struggles in its smartphone arm, the industry waved goodbye to a tech oddity. Operators can take heart that digital players do not get everything right, with the failure of Amazon’s Fire smartphone being filed under great flops of our time.

It was barely with us for 18 months but now has been discontinued, with staff laid off in the relevant departments. Amazon told The Verge there were no plans to rekindle the project. In October last year, it wrote down $170 million, mostly due to the handset’s failure.

The tale of the Fire shows just how hard it is to make a new device work. While Apple is preposterously profitable and Google feeds off the ubiquity of the Android ecosystem, handset manufacturers are finding it hard to find elbow room. Exceptions have been Motorola’s all-rounder, highly affordable handsets and Sony, whose new Xperia Z5 surprised with a 4K display. But turning those features into profits is a question many are finding difficult to solve.

Phoning in a new read

Vodafone has brought a digital library to students in Romania, allowing them to get books by scanning QR encoded wallpaper and downloading them to their smart device.

More than 200,000 students across 300 schools can take part in the project, which is an extension of its Digital Public Libraries initiative. Similar bookshelves have been set up in shopping centres, train stations and subways.

Vodafone is running the project in a bid to encourage mobile data usage. Romania is actually an oddity amid surging downloads – total data consumption across the country is a third of the European average.