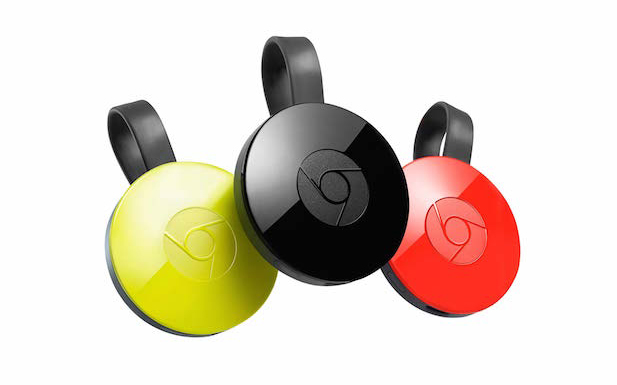 We say “stick” - actually, the design of Chromecast has been revamped so that it now more resembles a Christmas tree decoration. But let’s not dally on aesthetics, because the changes to Google’s media devices go far beyond this.

The new Chromecast Audio can be plugged into any old speaker system with an RCA, Optical or 3.5mm port to let users to stream music through them via Wi-Fi.

Using a laptop or mobile phone, users can stream music from services like Spotify, Deezer and Google's own Play Music, though unsurprisingly Apple Music and Jay Z’s Tidal aren’t supported.

It also supports more apps, and Google plans to make a concerted play for the gaming market in particular by allowing users to play high-quality mobile games on their TV sets.

It was a busy week for Google who also introduced its latest Nexus-branded smartphones, which have been made by LG and Huawei this time round.

Both devices feature a rear-mounted fingerprint scanner that Google has labelled “Nexus Imprint” and a USB-C port for charging, thereby making your desk drawer full of micro-usb cables redundant.

With a display of 5.7 inches, the Huawei-built Nexus 6P is strictly for phablet fans, whereas LG’s 5X comes in at a much more human hand-friendly 5.2 inches.

Shooting for the moon (and missing)

Google may be known for its numerous innovations, but it’s by no means immune to failure.

The Wall Street Journal reported this week that the company is hemorrhaging potentially billions through its “moonshot” projects - essentially pet projects Google ploughs money into in the hope that they might eventually turn into something profitable.

The problem is, things don’t always go according to plan: according to WSJ, analysts estimate that Google may have made operating losses ranging from $500 million to $4 billion this year thanks to moonshots that strayed off into the outer solar system.

Much of this has been pinned on Google X, the research arm behind the hit-and-miss Google Glass, where analysts speaking to WSJ put operating losses at $909 million.

A new app allowing users to rate other people set the Twittersphere ablaze on Thursday, demonstrating to full extent the swift decline of human society.

As if being described as “Yelp for humans” didn’t give you a clear enough indication of just how detestable Peeple is, the app lets users rate and comment on fellow human beings. Let’s just allow that to sink in for a moment.

Its creators claim that Peeple is a “positivity app” aimed at helping people attempt to better themselves and seek out fellow positive humans. Unfortunately, it’s also a stinking, steaming quagmire of legal and ethical problems, such as the fact there’s no opt-out option and people can “review” others without their consent.

Feeling sickened? You aren’t alone - the reaction from the media and the public in general has been obsessively bad (read: outraged). Perhaps there is hope for the human race after all.

Wireless Week rounds up the best (or in this case the worst) of the rest in mobile. If you don't follow us already on Twitter, you really should. We're @mobileeurope