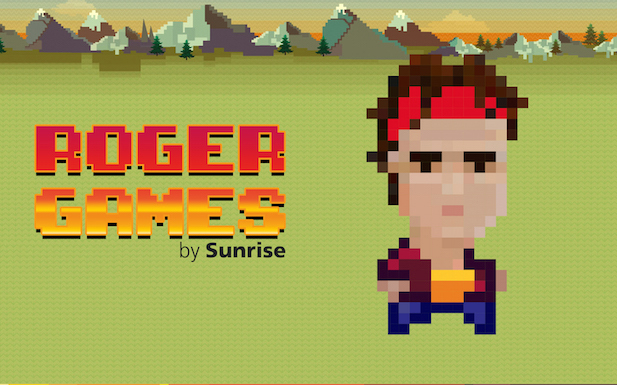 In a week where Apple made its debut on the Android operating system with the launch of the Apple Music app, several other telecoms stories caught our eye.

The effortless grace of Roger Federer swanning around a tennis court swatting balls out of the air is one of life’s great pleasures. I don’t want to encourage you to down tools but this video is worth getting a call from your IT department over.

What does a man with a penchant for wearing cardigans with his initials on it have to do with telecoms? Swiss operator Sunrise has made Saint Rog the face of its new mobile game, giving people the chance to play ping pong, skateboard, parachuting, football and, um, “lawn mower”.

Sunrise customers who play the game can also win prizes worth up to CHF150,000, as well as the chance to meet Federer himself. What does the Swiss ace think of the game? “I think it is cool and fun to run this innovative advertising campaign with my partner Sunrise. And to see myself as a pixel figure is quite unique.”

Next week: MTS releases a Doom clone where you play as Novak Djokovic, ripping apart zombies with your pixellated bare hands.

When smartphones get metaphysical

One of the greatest corporate statements to come from the telecom industry in recent years was uttered by Chinese vendor Huawei. When it revealed its annual results last year, Permanent Chief Executive Ren Zhengfei eschewed the normal banalities about tight cost control, performances exceeding expectations and difficult macroeconomic conditions. He instead opted for a nine page freestyle opus, describing the company as a tortoise who needed to stay focussed to catch up with “dragon spacecraft”.

Each time a Huawei press release popped into our inbox, we hoped it would boast a statement as deliriously bonkers as the one above. We’ve been waiting a while but it has finally happened. At its Innovation Day in Asia this week, the vendor discussed the future of the smartphone, which it dubbed the “superphone”.

This device would “take mankind closer to a world where the physical and digital realities will be further integrated”. Which is somewhat worrying to anyone with a passing knowledge of the Terminator canon.

Then Shao Yang stepped forward. Huawei’s President of Strategy Marketing said the following: “Inspired by the biological evolution, the mobile phone we currently know will come to life as the ‘Superphone’. The intelligence of the ‘Superphone’ will continue to evolve and develop itself into digital intelligence, capable of empowering us with interactions with the world. Through evolution and adaptation, the ‘Superphone’ will be more intelligent, enhancing and even transforming our perceptions, enabling humans to go further than ever before.”

To sum up: a smartphone that “evolves” and brings humans and machines closer like never before. I’ll be in my nuclear bunker.

Did you watch Fight Club and instead of thinking it a deft satire of millennial male angst, you thought 'actually, I’d love to punch the face clean out of Meat Loaf'? There’s an app for that. At least, there was briefly.

The internet has brought us a lot of things: shopping, piracy and sites that have problems with the letter 'e'. We’ve had Grindr and Tumblr, now we have Rumblr, an inspired and most likely illegal fighting app.

It has now vanished from Google Play but as Vice reported this week, for its brief existence Rumblr offered eager ladies and gentlemen to connect, meet up and pound each other’s body parts with their fists, head and knees. The website is still online if you are tough/stupid enough to take part.