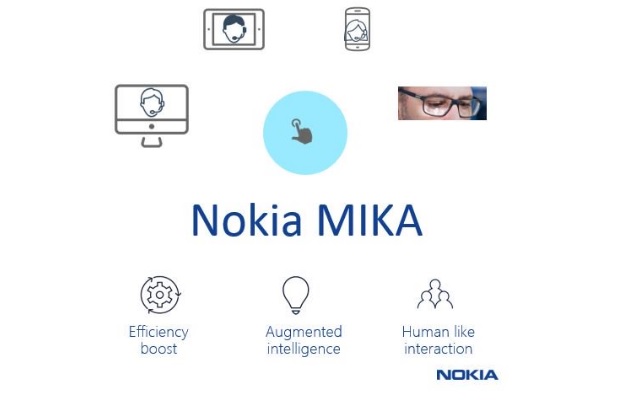 Nokia made headlines last month when it was found to have filed a patent for a new digital assistant.

Perhaps with an eye on Nokia’s return to the mobile phone market, many reports predicted that the assistant would be launched as a rival to smartphone assistants such as Apple’s Siri or Google Now.

However, when the product – Multi-purpose Intuitive Knowledge Assistant (MIKA) – surfaced it turned out to be designed exclusively for telecoms engineers.

“MIKA is not there to replace Google,” Igor Leprince, Head of Global Services at Nokia, confirms to Mobile Europe.

Rather, it aims to provide engineers with access to relevant knowledge and data while they are doing their job, through a single voice-activated interface.

Built by Nokia’s own developers and running on its own analytics platform, MIKA uses the vendor's knowledge library to provide recommendations.

This library features best practice information from network deployments that the vendor has worked on over its history. MIKA retrieves the information from Nokia's AVA cloud platform, which hosts Nokia data and information as well as supports a range of Nokia network monitoring and maintenance services.

MIKA is also built around the kinds of language and terminology that engineers will use.

However, Leprince says that the subject matter is not the only difference with consumer search engines: there is a difference in focus.

Engineers do not need a range of choices, as Google would provide, but specific knowledge for specific situations.

“For us, it’s not about searching for information, it’s about finding the right information,” he says.

One of the key features of MIKA, Leprince explains, is how information is fed back into the software.

When a question has been resolved by using one of the best practices in the database, it is added to the database automatically through MIKA’s machine learning capabilities.

This means if a problem has been solved in a particular way, that answer will be prioritised in future searches.

The return on investment from MIKA, Leprince says, will be in time-saving. Nokia claims a given engineer wastes an hour of productive time per day searching for information.

The digital assistant has been trialled for a few months internally on 13 different roles within Nokia, and now will be used in customer networks under two main models.

One of these is by Nokia engineers as part of Nokia’s managed services operation, where Nokia monitors and manages an operator’s network for them.

MIKA will also be sold to operators to build it into their own operations, with Nokia working to integrate it with the telcos’ own knowledge libraries.

“[MIKA] uses open APIs, so with a bit of customisation it can be used with operators’ own data sources,” Leprince says.

Bengt Nordstrom, CEO of strategic consultancy firm Northstream, admits he would not have identified time spent looking for information as a “major problem”.

He adds: “Nokia has a tradition of hyping their technology solutions a bit.”

However, Nordstrom thinks it is likely that other networking vendors will explore this area as “part of a general technology trend around big data and AI”.

The product is currently in customer trials. Further details on the assistant, including demonstrations, will be revealed at Mobile World Congress later this month.