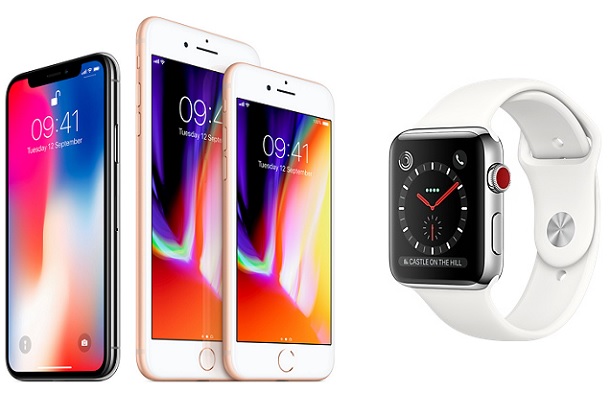 Apple gave its traditional blockbuster spin on technology, as it debuted a cellular smartwatch, facial recognition technology and augmented reality in its latest product showcase.

While three smartphone launches garnered much of the noise, Apple gave a welcome boost to e-SIM technology with a new version of its smartwatch.

Users will be able to make calls, send texts and stream music thanks to an e-SIM. In Europe, the Watches will be available to customers of Orange's network in France, Deutsche Telekom's in Germany, Sunrise and Swisscom in Switzerland and EE in the United Kingdom.

Despite Apple's market leading position in the category, Ian Fogg, Senior Director, Mobile & Telecom, at IHS Markit was gloomier about the Apple Watch's mass appeal prospects. “The consumer appeal of LTE smartwatch support at this stage is uncertain. The lack of a large display on a smartwatch means a smartwatch cannot yet replace a smartphone for many applications.

“Plus, key consumer apps such as WhatsApp, Facebook or Google Maps do not have native Apple Watch versions: leave the iPhone behind, and users leave behind almost of all their apps, even with cellular. Plus, they leave their main camera behind too.

"Most of the time, consumers will continue to carry an iPhone alongside a watch. Only when exercising can a smartwatch really be sufficient. Even then, the pressure on a smartwatch’s tiny battery means LTE smartwatches can last only a few hours as a true solo device.

For Apple, the bulk of its product showcase was devoted to the iPhone X, a luxury version of its flagship handset priced from £999. The home button has been removed, the smartphone boasts an almost end to end display and the phone unlocks using facial recognition.

While the latter feature would be familiar to users of Android devices from 2011 onwards, Apple's version takes a 3D scan of its user's face by projecting more than 30,000 invisible infrared dots.

The image and 3D pattern is then flushed through a neural network to build a model of the user's face.

Data is stored and processing takes place on the device, which Apple said is to protect user privacy.

This Face ID authentication system can also be used to project the user's facial expressions onto a dozen different emoji, dubbed Animoji.

Face ID is powered by Apple's new A11 Bionic chip, which Apple described as "the most powerful and smartest chip ever in a smartphone" and upgrades its former A10 Fusion chipset.

It has a six-core CPU design. Two of its performance cores perform 25 percent faster and four efficiency cores run 70 percent faster than those on existing handsets.

Apple said the new chip also features on its iPhone 8 and 8 Plus, a lower key upgrade on its current generation of devices compared to the iPhone X.

The hope is that developers will use Apple's existing ARKit software to build machine learning, AR apps and 3D games.

Analysts were united in predicting Apple will cement its seemingly unstoppable global success. Geoff Blaber, Vice President Research, Americas, CCS Insight, said: "The key question now is how much it will prioritise software and services as the engine of future growth. They will be essential to reinforcing Apple's highly successful hardware business and sustaining further progress over the next decade.

"The iPhone X and iPhone 8 models are very strong additions to Apple's portfolio that address increasing competition from Samsung and others. Rivals will be watching how quickly Apple can meet demand for the iPhone X and begin to build margins on a new design with new components."

Augmented reality will be placed at the heart of the forthcoming iOS 11, which launches later this month. Fogg said: "The new iPhones will benefit from the numerous improvements in iOS11. The tiny bezels of iPhone X will make AR apps more immersive than on other smartphones. The new cameras draw less power, which will help AR apps run for longer than they will on iPhone 7 models.

"And, because of the tight integration of software and hardware, AR developers will know their AR experiences will run smoothly on all supported iOS devices.

Apple will gain a significant time advantage over Google and Android-based OEMs where there are numerous camera designs in use, and AR support will take much longer to roll out across the Android installed base because the sluggishness of Android OEM software update cycles.

"As a result, Apple will have a long window to use AR experiences to market iPhone hardware and drive additional sales before Android catches up in late 2018."

CCS's Blaber added: "ARKit looks set to repeat history and underline Apple's unique talent of arriving late, redefining expectations and creating an avalanche of interest from developers and the public."

Elsewhere among last night's announcements, any owners of the three new smartphones will be able to charge them remotely from next year when new pads are released, similar to the pucks that charged Windows Phone 8 devices in 2012. Wireless charging will support the Qi standard.

Jeff Orr, Research Director at ABI Research, said: "The announcement of Qi supports clears the way for accessories makers to focus their efforts on developing for a single wireless charging standard that is supported by the two leading smartphone makers: Samsung and Apple."