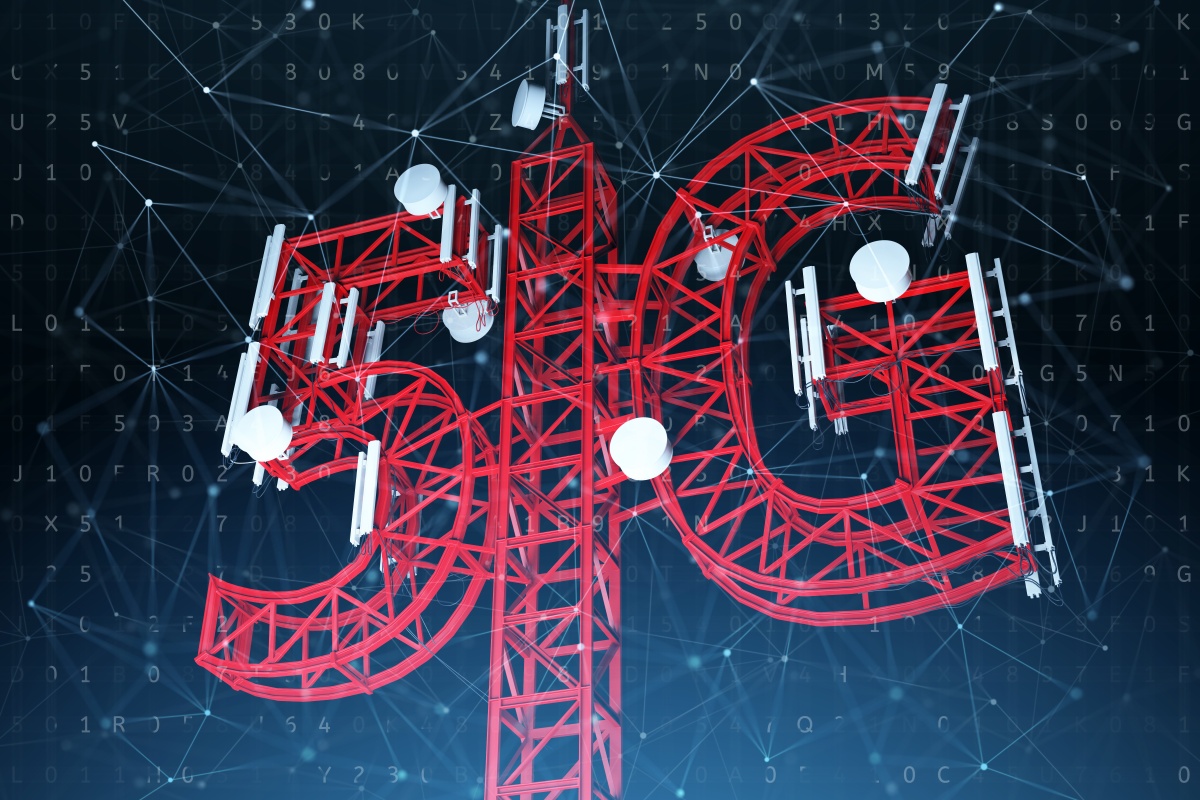 Mobile operators target consumers and enterprises with 5G, but return on investment and backhaul costs are big concerns.

Our 2019 survey of Mobile Europe & European Communications' readers confirms that 5G deployment is underway with operators targeting consumers and enterprises with new services. However, service providers have big concerns about getting a return on their investment (ROI) in the new technology and about how to handle backhaul economically.

Operators also are worried they could be displaced if enterprises decide to deploy their own 5G networks. We conducted this readership survey in April and May 2019. Of 85 respondents, 47% were network operators, 32% were suppliers and 21% were other types of companies, such as consulting companies, systems integrators, analysts and regulators.

A full 88% of respondents were from Europe, 8% from the Americas, 2% from the Asia-Pacific region and 2% from the Middle East and Africa.

Nearly half of mobile operators surveyed said they will deploy 5G this year, and just over a quarter in 2020. Most 5G deployment in Europe is happening in Switzerland through Swisscom and Sunrise Communications, though operators in other countries are beginning to roll out 5G.

For example, Vodafone has limited deployments in Spain, and T-Mobile Austria announced 5G availability in March.

As we went to press, EE announced it would begin offering service in a handful of cities in the UK on May 30. 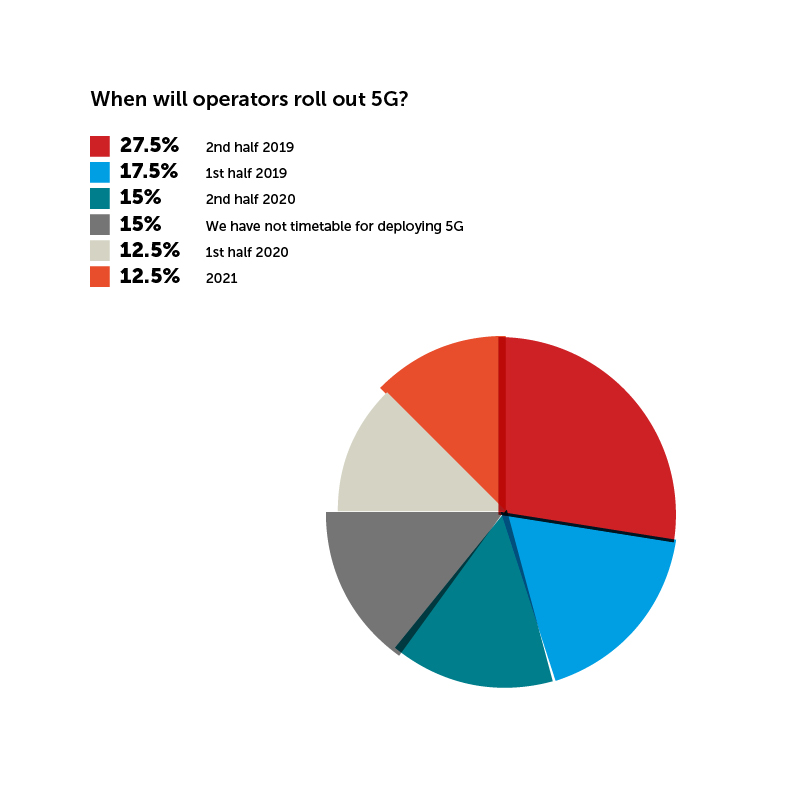 Notably, 15% of the operators we surveyed said they have no timetable for deployment. With hype about 5G and the race to deploy it at an all-time high, the reluctance of some operators to commit to 5G is telling.

So far, 5G largely has been pushed by equipment vendors for obvious reasons. And while many communications service providers (CSPs) share their enthusiasm, others are more sceptical. Chief among their concerns is fear that they will not be able to get a ROI in 5G before “the next G” emerges, promising even faster speeds and more capacity.

A recent report, 5G Deployment State of Play in Europe, USA and Asia, which was commissioned by the European Parliament’s Committee on Industry, Research and Energy (ITRE) and published in April, suggests this is a valid concern.

It continues, “It is becoming clear that 5G will cost much more to deploy than previous mobile technologies (perhaps three times as much) as it is more complex and requires a denser coverage of base stations to provide the expected capacity,” the report states. “

The European Commission has estimated that it will cost €500 billion to meet its 2025 connectivity targets, which includes 5G coverage in all urban areas.” That’s a hefty price to pay without any guarantee of ROI.

We’ll discuss the challenges in more detail later, but first let’s look at how operators are going to market with 5G services. We asked respondents whether they are targeting consumers or enterprises first, which use cases are most interesting and which services are being delivered first. A majority of respondents (operators and suppliers) said that consumers and enterprises are both targets. 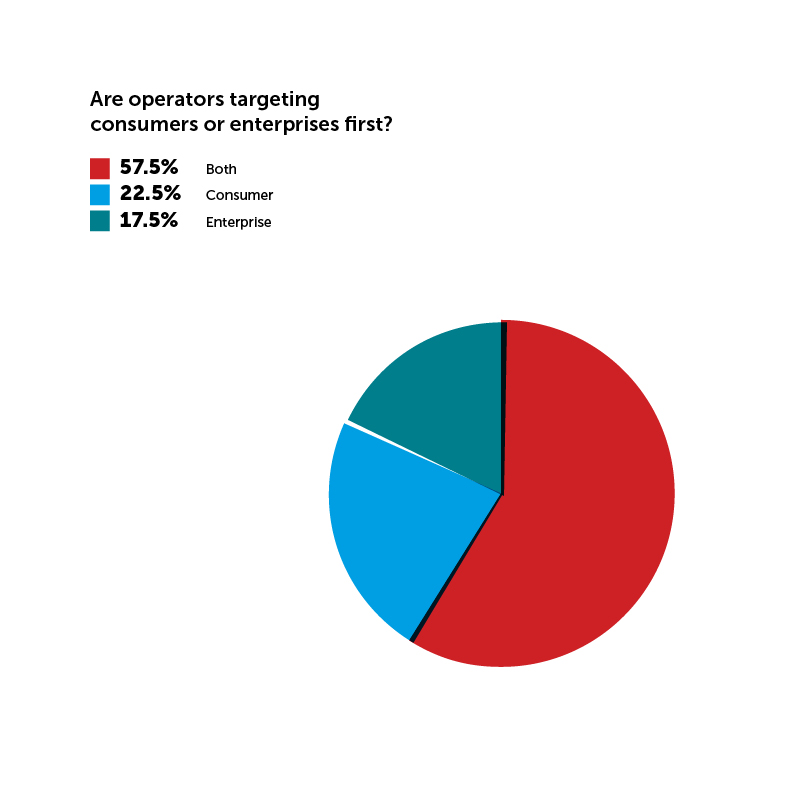 This result differs slightly from our Q1 survey, which found that 40% of respondents intended to target enterprises first. Interestingly, the services that respondents say are coming to market first – enhanced mobile broadband and fixed wireless access – are predominantly for consumers.

Smart city applications rank highly among the first services operators are rolling out, and they top the list of the most interesting and promising use cases for 5G, followed by connected vehicles and industrial automation. 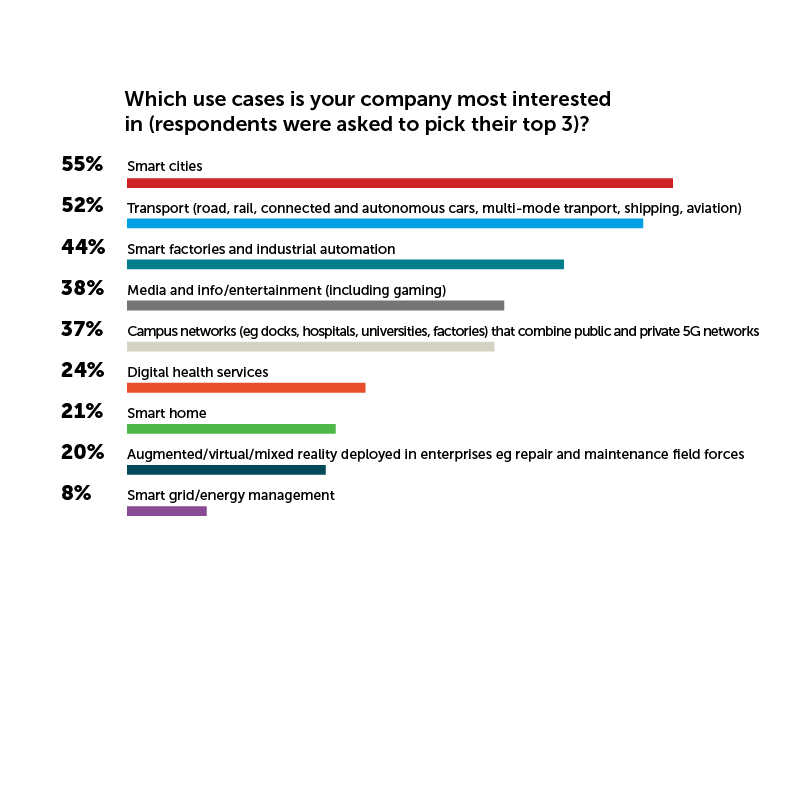 In addition to smart cities, the 5G Observatory tracks “digital corridors”, such as the Pan-European Union 5G corridor, where vehicles can traverse borders. These regions allow for testing of cross-border road safety; data access, quality and reliability; and connectivity.

More than a third of respondents ranked enterprise services such as industrial IoT (IIoT), media and entertainment, and campus networks in their top three choices for promising use cases.

As we noted in our Q1 survey analysis, many observers agree that operators must tap the enterprise market to succeed with 5G as the market for B2B internet of things (IoT) services is expected to be twice as large as the consumer market by 2020. Serving the enterprise market is challenging for mobile operators, partly because it’s not clear what they need to deliver.

When asked if operators understand what their enterprise customers want and expect from 5G, only 6% said “yes”. Nearly a quarter said operators don’t know enough, and another 23% said customers don’t know what they want. 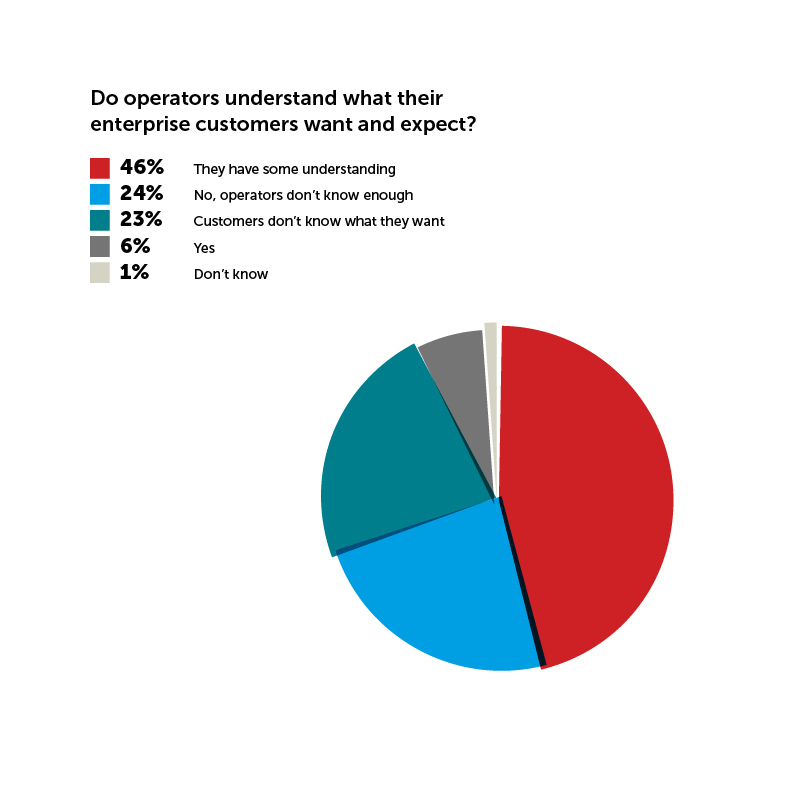 Another problem is that in addition to upgrading radio access and core networks for 5G, operators must overhaul their IT support systems to be able to manage B2B services end to end.

This is especially tricky when partners are involved. Only a quarter of respondents put the complexity of 5G network management in their top three biggest challenges, but this will be a major issue to resolve if operators are to deliver quality guarantees over network slices.

If operators don’t figure out, and quickly, how to market 5G services to enterprises, there is a risk that enterprises will develop their own, private 5G networks, in much the same way they built their own voice and data networks decades ago. Indeed, survey respondents are aware of the risk, with 26% citing displacement among their biggest concerns.

As noted, the biggest challenges for operators are financial, with nearly half citing worries about the ROI as the most significant threat, followed by ability to provide backhaul at low enough cost. The European Parliament’s report on 5G is critical of the industry’s push to roll out 5G ahead of demonstrable demand for it. We asked operators which services they are rolling out first. 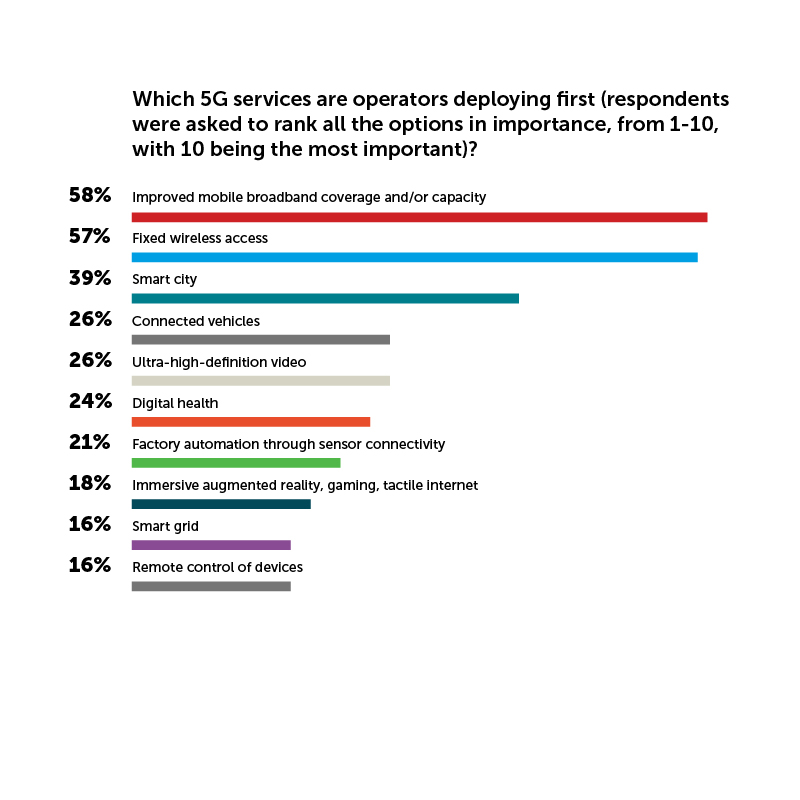 “As 5G is driven by the telecoms supply industry, and its long tail of component manufacturers, a major campaign is under way to convince governments that the economy and jobs will be strongly stimulated by 5G deployment,” the report states. “However, we are yet to see significant ‘demand-pull’ that could assure sales.”

These campaign efforts are also aimed at the mobile network operators, but they have limited capacity to invest in the new technology and infrastructure as their returns from investment in 3G and 4G are still being recouped.

The notion of a “race” is part of the campaign but it is becoming clear that the technology will take much longer than earlier generations to perfect.” The report notes, for example, that China believes 5G will take ten years to roll out nationally because of its complexity.

Backhaul is another looming headache. 5G promises ultralow latency (1 to 10 milliseconds), peak data rates of 1 to 20Gbps, and connection density of up to 1 million devices per square kilometre.

Backhaul networks today are not equipped to meet anything close to these requirements and a debate is taking shape over the best way to accommodate them. 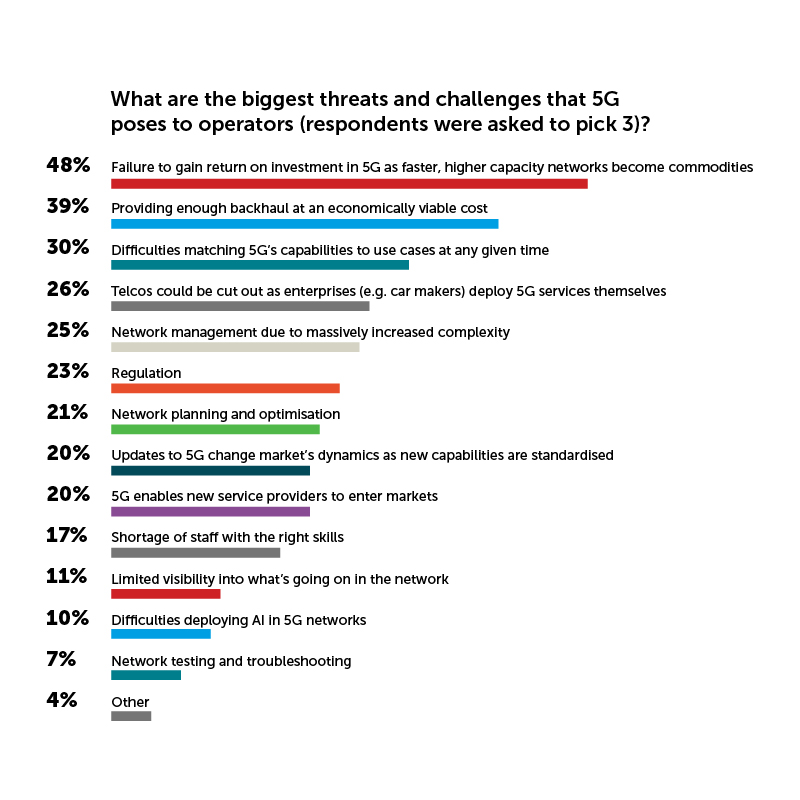 Improving fibre connectivity is an obvious solution, and this topped the list of critical success factors for 5G deployment (see below). But fibre deployment requires huge capital investment, and fibre may not be fast enough, according to some operators and network equipment suppliers. For that reason, they are considering wireless backhaul options.

One additional challenge which we did not ask about in this survey, but which could slow deployment of 5G, concerns about potential health risks posed by the new technology. HSBC Securities analyst Sunil Rajgopal noted in a recent report that health concerns are elevated because of the density of 5G deployments.

“The race to 5G could be slowed by alleged health concerns related to radio frequency,” Rajgopal writes. “These concerns have been around as long as mobile phones, but there have been a number of recent regulatory/public initiatives demanding delays or outright bans on the rollout of 5G.”

The European Parliament’s report cites this as an issue as well: “One aspect [of 5G] that is not well understood today is the unpredictable propagation patterns that could result in unacceptable levels of human exposure to electromagnetic radiation.”

In April, the Swiss government announced that it will introduce a monitoring system to assuage concerns about the potential health impact of 5G emissions. The Cabinet agreed to have the country’s environmental agency measure levels of non-ionising radiation, assess the risks and regularly inform the public about its findings.

Finally, we asked respondents which factors will be most important to 5G success. It’s not surprising that sufficient fibre tops the list, followed by establishing a business case and being able to deploy new services rapidly. 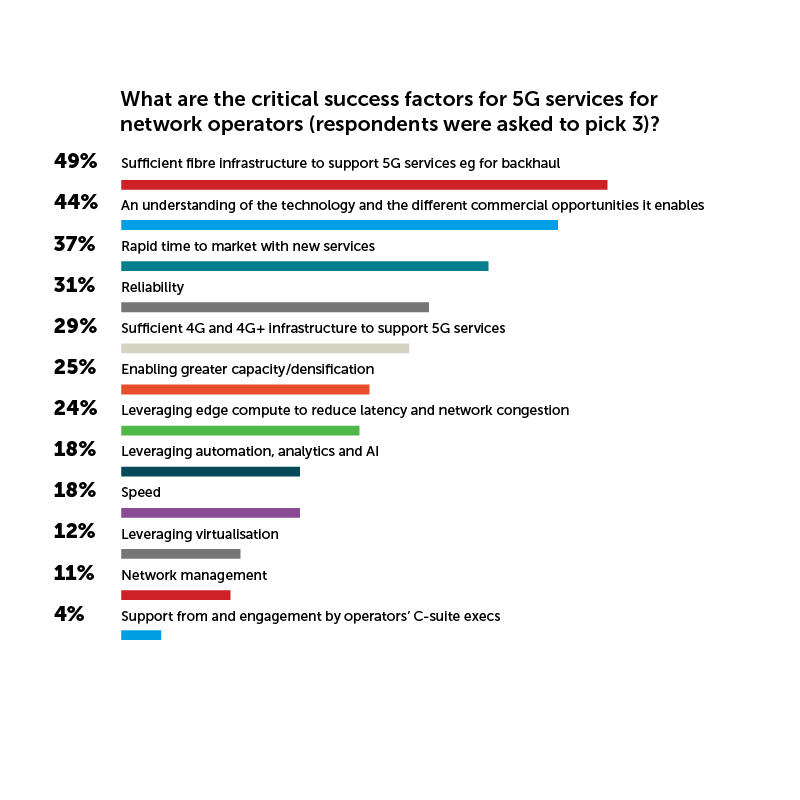 The European Parliament’s 5G report offers four specific recommendations to help operators ensure successful deployment and monetisation of 5G in the EU:
• Increasing long-term R&D efforts on 5G is essential to understand multiple propagation unknowns (for example, measuring and controlling radio frequency EMF exposure with MIMO at mmWave frequencies).
• More detailed study of business models is needed to better define the goals, scope and
revenue sources for 5G.
• Policy for 5G networks should be based on encouraging infrastructure sharing and separation
of infrastructure and services.
• Developing a lightweight regulatory framework for deployment of small area wireless access points (SAWAPs), key to the densified 5G networks envisaged, is essential for their easy rollout at the very large scale of base stations necessary.”

This survey was published in the Q2 Mobile Europe | European Communications magazine – download it from here free.