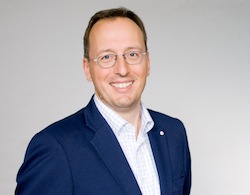 The operator, which recently marked its 15th birthday, said the demo showed how consumers will record and stream smartphne content and multimedia onto a cloud based storage system by using a virtual infrastructure. If this use case takes off, it would mean consumers would not have to offload content from their smartphones onto their PC, ensuring data is better protected against loss.

Günther Ottendorfer, CTO of Telekom Austria Group [pictured], said: "We are absolutely confident that the NFV technology is a defining trend in the mobile industry. We are therefore very pleased with Vipnet's initiative to explore and implement NFV. The success and efficiency goes along with the 15th anniversary of innovation strategy at Vipnet. For Telekom Austria Group, this is just the beginning of a journey to explore the latest technologies and further improve services for our customers,  performance, experience or availability."

Telecom Austria said it is building upon the VipNet demo with a number of further NFV trials. It said that innovation on network infrastructure will be important for its differentiation in the years to come. Mladen Pejkovic, CEO Vipnet, said: “We are more than pleased that Vipnet counts among one of the first operators in Europe to showcase the NFV technology. NFV is not only an important topic within the Telco industry today´s showcase also strongly emphasizes our successful 15 years innovation strategy.”

Last week, Telefonica announced it was building an NFV management platform with Red Hat and Intel and had also set up an NFV lab to test and develop new features for virtualised networks. The Spanish operator aims to have 30 percent of its network virtualised by 2016, following its Unica initiative.