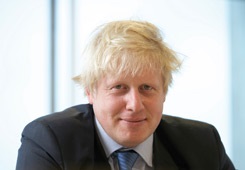 The Mayor of London could open up access to bus stops, lamposts and other street furniture to increase mobile coverage, as he looks to make the UK's capital a 5G ready city by 2020.

Boris Johnson announced his London Infrastructure Plan 2050 today, his bid to make London ready for an expected 37 percent increase in population within the next 26 years.

As well as plans for transport, energy and water, it said digital connectivity is essential for the city. Among the plans Johnson has proposed is bringing planning applications for telecoms infrastructure to fall under the Mayor's remit, allowing him or her to make a ruling "as a last resort". It said it wants networks to be "enabled rather than inhibited" by the current regulatory framework in the city.

Johnson said he wants London to "potentially" become the first capital city to offer 5G by 2020. While a lot of the discussion around the technology centres on exactly what it is and what its uses are, the Mayor's office said "it is widely considered that it will give the impression of instant unlimited access to the internet".

Professor Rahim Tafazolli, Head of the Centre for Communication Systems Research, University of Surrey, said: “London should be the first capital city in the advanced economy countries to deploy 5G broadband network to alleviate expected capacity crunch by 2020s. This will give the sensation of infinite capacity."

Other plans include working with operators to develop a connectivity map, which could lead to property connectivity ratings being developed.

The Mayor has said he will publish a Digital Inclusion Plan later this year, which will include the advice of a new Connectivity Advisory Group. The group will lead the planning of London's future connectivity infrastructure.

Vodafone was among the first to lend its support to the group. Its UK CEO Jeroen Hoencamp said: “We share the Mayor’s strategic vision for the capital, and will work with him and the boroughs to provide Londoners and visitors with access to very best mobile data network.

"The future success of the capital depends on advanced communications and we are investing £200 million over the next two years to deliver a world-class network across the city on top of the £1 billion we have committed to spend nationally this year.”

Group CEO Vittorio Colao has been critical of his company's London reception in the past, saying it was "time to muscle up" in terms of quality of service.