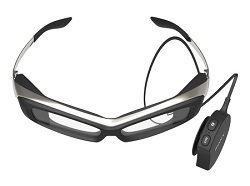 Sony has launched a software development kit for its forthcoming SmartEyeGlass product, ahead of it going on sale next year.

Android apps on connected smartphones or tablets will do the bulk of the computing, collecting data and sending visual information back to the glasses. The glasses will feature a 3MP camera for photos and can shoot VGA video.

The glasses, which can be operated using a wired controller, include an accelerometer, gyrometer, electronic compass, brightness sensor and microphone. Sony said consumers will have a full view through the glasses, with nothing obstructing their vision. The smartglasses connect to paired devices through Bluetooth 3.0 and Wi-Fi.

Developers working with the SDK will use the display, touchscreen and camera on a smartphone to mimic how the SmartEyeGlass will work in practice.

Among the apps that are already being developed are a pedestrian navigation app from Zenrin Datacom, a travel guide and a running platform.

Sony said it wanted developers to get to work on the augmented reality functionality, through the SDK's emulator. The manufacturer is planning to launch an early access programme later this year.

Hiroshi Mukawa, Head of the SmartEyeglass project, commented: "This is about going beyond hardware. Our thinking is to match external creativity with in-house innovation to truly stretch the capability of the products we create – releasing the SmartEyeglass SDK early means that both our industry’s most established and up-and-coming developers will help shape what SmartEyeglass is capable of.”

The announcement follows the launch Google Glass earlier this year.

Earlier this week, Sony announced it would make cuts to its mobile division, which it had earmarked as a key part of its business, after dire financial results caused by falling smartphone sales.