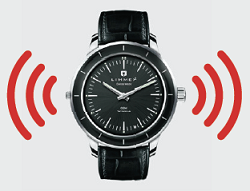 The Limmex emergency smartwatch could be set to hit new regions, after its Swiss manufacturer began installing remote provisioning software into the device.

The smartwatch, which is targeted at the elderly, children and people with health problems, can make calls by pressing the watch face .

New M2M connectivity has been provided by Gemalto. It has provided its Cinterion machine identification module (MIM) and its LinqUs on-demand provisioning service, which allows Limmex to deploy the product across different territories. The technology also allows Limmex to create a range of different variants and profiles into the smartwatch.

Limmex's smartwatches look like traditional timepieces but have emergency call capabilities built in. The watches include a microphone and loudspeaker to allow a user to communicate with their emergency contact.

Earlier this month, the company launched a GPS-equipped watch that sends an SMS to the person called after the alarm has been raised. The SMS contains a link to a map indicating the location of the watch at the time of the emergency call.

If there is no GPS signal reception, GSM tracking is used over the mobile phone network.

Swisscom has offered Limmex watches since 2012 Limmex says it works with Deutsche Telekom as well.

Recent research claimed that barriers are being broken down for new entrants into the wearables market. A report from Juniper Research said the market will be worth $53 billion (€42 billion) by 2019, with shipments increasing more than five fold to 116 million.

Another report from Gartner forecast that smartwatches will become mass market next year with an average selling price of $150 (€115).