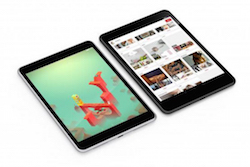 The N1 is the first meaningful release from Nokia’s Technologies arm and comes seven months after it sold its devices arm to Microsoft.

The new device features Z Launcher, an interface that allows users "to scribble a letter or two" to find their content quickly. Over time the Z Launcher learns what applications are in use, and predicts and highlights the applications consumers are expected to want based on time of day and location.

It runs the Android Lollipop OS and is powered by a 2.4Ghz Intel AtomTM quad-core processor.

Nokia said the N1 is due to launch in China in Q1 next year for around $249 - roughly €200 - before taxes. Other markets are expected to follow although no details were given.

"We are pleased to bring the Nokia brand back into consumers' hands with the N1 Android tablet, and to help make sophisticated technologies simple," commented Sebastian Nyström, Head of Products at Nokia Technologies, who announced the N1 at the Slush technology conference in Helsinki.

Nokia said it is licensing the design, Z Launcher software layer and IP on a running royalty basis to the OEM, understood to be Foxconn.

The vendor also today announced the results of a three-month trial of its Intelligent Network Platform (INP) by South Korean telco LG Uplus.

Nokia claimed the operator saw a 35 percent performance gain in content delivery using its Liquid Applications-based platform, as well as reduced latency for objects between 10-30MB in size.

Nokia’s Liquid Applications platform allows third-party application data to be held at base stations at the edge of the network, where it can be hosted before being delivered instantly to local subscribers.