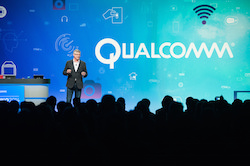 Qualcomm has unveiled an LTE-A Category 10 modem and a new envelope tracker alongside news it is to enter the server market.

The new Gobi 9x45 modem supports up to 60MHz 3x carrier aggregation across TDD and FDD spectrum, and has integrated support for LTE Broadcast, VoLTE and LTE dual-SIM.

Capable of 450Mbps downlink and 100Mbps uplink speeds, it is the fifth-generation multimode and second-generation 20nm modem from Qualcomm.

In addition, a new QFE3100 enveloper tracker brings improved operational performance to the modem and better power efficiency. The chipmaker said it has been optimised for a 30 percent smaller board area.

Both products, which were unveiled at the company’s 2014 Analyst Meeting on Thursday, have been pinned for commercial release in 2015.

Qualcomm also announced that it would enter the market for chips used in server systems, which it claimed represented a $15 billion (€12 billion) business opportunity between now and 2020.

CEO Steve Mollenkopf said that the modern requirements of smartphone processor meant they were increasingly applicable to the way in which server chips are designed.

As cloud technology continued to change the topology of the datacenter, Qualcomm is in a position to “drive leadership technologies” in edge-of-network technologies, he added.

Earlier this week, Qualcomm and Ericsson completed an interoperability test of LTE Category 9 carrier aggregation, achieving download speeds of up to 450Mbps on the chipmaker’s LTE-A modem.