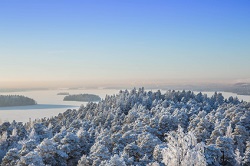 TeliaSonera and DNA are bringing a new 2G, 3G and 4G network to northern and eastern Finland, after both operators signed a cooperation agreement.

The two operators will source, implement and manage the network through their Suomen Yhteisverkko Oy joint venture. The JV has selected Omnitele to design the radio network and it will also plan, design and optimise the network until the end of 2017.

The companies said the new network will cover around half of the country and 15 percent of the population. Network sharing between the two companies will be enabled via a multi-operator core network.

Teliasonera and DNA will combine frequency and base station locations in the north and east of the country, which they said would lead to a better quality network. It said the network technology, which will include 2x2 MIMO antenna, would offer customers speeds of up to 300MBps.

Antti Jokinen, CEO of Suomen Yhteisverkko, said: "Our aim is very high, we want to offer the best possible customer experience, maximise the efficiency of our operations and make targeted network investments."

Omnitele CEO Tomi Paatsila added: "When launched, the network will most probably offer one of the best broadband experiences in the world. We will at least do everything to achieve that."

Finland has one of the biggest proportions of smartphone adoption globally. The project follows the launch of the joint venture by the operators during the summer.