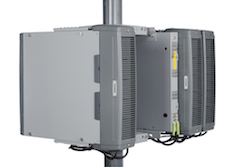 The trio showcased the "record-breaking” speeds at the ITU Telecom World 2014 in Doha, Qatar, hitting downlink rates of 3.8Gbps and uplink rates of 300+Mbps by aggregating 10 carriers with 200MHz bandwidth from TDD and FDD LTE spectrum.

At this speed, users could download a full-length 5GB HD film in just 11 seconds whilst simultaneously uploading a 30MB clip in less than a second, Nokia claimed.

Zhang Qi, VP of TD-LTE at Nokia Networks, said: “We just broke our own speed record which shows our capability to help operators address the ever-increasing demand for faster data download and upload speeds. TDD-FDD LTE not only delivers high uplink and downlink throughput, but also helps balancing the load between two networks, efficiently using the spectrum.”

The trial was supported by the Global TD-LTE Initiative (GTI), a virtual open platform established to promote cooperation among global operators to promote TD-LTE, which is generally regarded more efficient and higher-performing.

Madam Huang Yuhong, Deputy General Manager of China Mobile Research Institute and Secretary General of GTI, said: “This groundbreaking throughput is a milestone that boosts our efforts as we drive the commercialisation and globalisation of TD-LTE and TDD-FDD converged technology across the globe. In collaboration with Nokia Networks, our long-standing and trusted partner, we continue to exploit the immense capacity potential of TD-LTE.”