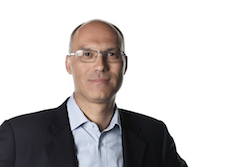 Steve Pusey, Vodafone's Group CTO and the public face of its 4G advertising, is to retire from the operator in July.

He will be replaced by Johan Wibergh (pictured), Executice Vice-President and Head of the Networks segment at Ericsson.

Pusey joined the UK-based operator from Nortel in 2006 and became a board member three years later. Vodafone cited him as "defining and leading" its tech strategy, including expanding its 3G coverage, launching LTE in 15 countries and developing "world-class" IT, procurement and security functions.

The operator also made reference to Pusey leading its Project Spring network investment programme, as well as playing a role in buying, integrating and developing fixed-line and fibre networks across various regions.

Vodafone Group CEO Vittorio Colao said: "Steve has been an outstanding colleague who has made an immense contribution to Vodafone, and I would like to thank him for his wisdom, focus and commitment. He will leave as his legacy a business strongly placed for success as a result of his efforts, including most recently his leadership of Project Spring which is well on track and already delivering significant benefits for our customers."

Pusey added: "Vodafone is a great company and it has been a great privilege to share in its journey over the last eight years. I have worked with the best people in the industry and have made friendships that will last a lifetime. I will leave the Vodafone technology community in excellent hands and wish Johan every success."

Ericsson's Wibergh will join Vodafone in May to lead a period of transition up until Pusey's departure date of 31 July 2015. At Ericsson, Wibergh runs a business staffed by 27,000 employees globally and which had a turnover of €13 billion in 2013.

Wibergh joined the vendor in 1996 and held senior roles in Brazil and the United States. In his current role, he is responsible for strategy, research and development, product management and sales for the networks arm.

Once Wibergh leaves Ericsson, his responsibilities will be taken over by Ericsson CEO Hans Vestberg. The vendor is understood to not be actively searching for his replacement.

Colao said of his appointment: "His background and skills are strongly complementary as we continue our transition to a global data company and I look forward to working with him closely."