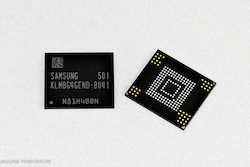 Samsung has entered mass production of embedded package on package (ePop) memory for high-end smartphones, which combines essential memory components onto a single board.

The all-in-one solution combines 3GB LPDDR3 DRAM alongside a 32GB embedded multimedia card (eMMC) and a controller, which can stacked directly on top of smartphone processors.

The ePoP can operate at a 1.86GB input/output rate and a 64-bit bandwidth input/output. Samsung said the chip is suitable for a “wide range” of mobile applications, including high-end tablets.

According to the manufacturer, ePOP requires 40 percent less space that traditional PoP setups consisting of separate DRAM and eMMC units. As a result, device makers can use the additional space for other components, such as larger batteries.

“We plan to expand our line-up of ePoP memory with packages involving enhancements in performance and density over the next few years, to further add to the growth of premium mobile market.”