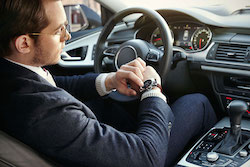 LG will launch an all-metal smartwatch at next month's Mobile World Congress aimed at the luxury market and powered by Android Wear.

The LG Watch Urbane will feature a 1.2GHz Qualcomm Snapdragon 400 chip and has 4GB worth of memory. Among the sensors is a photoplethysmography tracker, which monitors heart rate during exercise.

The watch also features an Always On ambient mode, which offers a low light display with a reduced power consumption.

The wearable has the same 1.3-inch circular P-OLED display as the manufacturer's Watch R, which was launched last year, but has a much thinner bezel.

The watch runs on Android Wear and is compatible with smartphones that run Android 4.3 and above.

"LG Watch Urbane is an important part of our strategy to develop wearable devices that are worn and viewed as everyday accessories, not electronic gadgets.”

A recent report from Cisco suggested that the wearable category will overcome a slow start to reach sales of half a billion from 2019. The vendor said the market will mainly be driven by sales in North America and Asia-Pacific.

Apple is on the verge of launching its long-awaiting Watch wearable, with CEO Tim Cook saying recently that the device is primed for an April release.