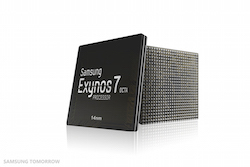 Samsung claimed its “industry’s first” 14nm process reduced power consumption in its new chip by 35 percent and enabled productivity gains of 30 percent when compared to its 20nm process. Processing speeds were also said to be improved by a fifth.

An updated version of the Exynos 7 is widely expected to power Samsung’s Galaxy S6 smartphone when it goes on sale later this year, after it was reported the company snubbed the Snapdragon 810 developed by long-time partner Qualcomm.

In semiconductors, FinFET refers to a “3D” transistor construction, as opposed to a typical flat or “planar” structure.

Samsung said the new 14nm process allowed it to overcome scaling limitations from planar SoC structures and give the manufacturer “a significant competitive edge” within the mobile SoC industry.

“We expect the production of our 14nm mobile application processor to positively impact the growth of the mobile industry by enabling further performance improvements for cutting-edge smartphones.”

Samsung said its 14nm FinFET process would be extended to other products over the course of 2015.