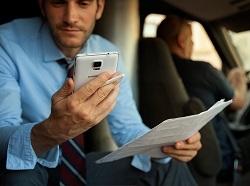 LoopPay's software allows point of sale terminals to turn into contactless receivers and Samsung said the acquisition would help strengthen its efforts to build mobile wallets.

The world's biggest smartphone maker is under pressure from rival Apple, which launched its Apple Pay service last year with the release of the iPhone 6. Samsung said around 90 percent of the world's existing point of sale terminals could be converted to contactless receivers without the need for new hardware investment.

Recent research from Berg said shipments of NFC-ready terminals hit 9.5 million last year, with the installed base expected to achieve a compound annual growth rate of 28.4 percent to hit 74.9 million in 2019.

As part of the deal, LoopPay's founders Will Graylin and George Wallner will join Samsung. The Korean manufacturer had been a strategic investor in the company, along with Visa and private label credit card company Synchrony Financial.

David Eun, EVP of Samsung's Global Innovation Centre, said: "We are excited to take our relationship with LoopPay to the next level, by bringing consumers a mobile wallet solution that is not just safe and reliable, but also widely accepted at more locations than any competing service. Through this deal we can significantly accelerate our mobile commerce efforts. LoopPay's outstanding leaders and team have deep-rooted relationships with banks, card networks and merchants that will complement those Samsung has established over the years."

Will Graylin, CEO of LoopPay, added: "LoopPay is focused on delivering a digital wallet solution that is dependable for consumers around the world, one that provides more value from card issuers and the merchants that serve them. We are excited to join the Samsung family to continue our goal of making smartphones trusted, secure smart wallets and unlock the limitless possibilities of mobile enabled commerce."

Meanwhile, Samsung has revealed a public safety LTE based solution, offering push to talk and LTE broadcast services based on 3GPP Release 12.

The vendor said the solution focuses on stability and built-in redundancies to ensure it works in time-critical situations.

It has used the product to build a dedicated railway and subway security and operations solution dubbed Railway LTE. It aims to help operators, transport infrastructure firms and public sector agencies to manage and coordinate rail traffic.

The public safety solution is expected to go on sale during the third quarter of this year. The Korean government will install the network in the Gangwon province by the end of this year.