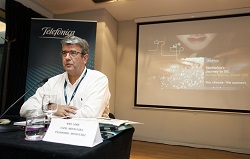 Telefónica has hit downlink speeds of 375MBps on its commercial network in Barcelona by running tri-band carrier aggregation.

The operator partnered with Ericsson and Samsung, using the latter's Category 9 Note 4 smartphone to showcase the technology at its booth at Mobile World Congress and at a central Barcelona hotel.

During the demonstrations, it aggregated 20MHz of its holding on the 2.6GHz band, 20MHz of its 1800MHz and 10MHz of its 800MHz. The tests also hit uplink speeds of 50MBps.

Telefónica said it was planning to commercialise the technology once sufficient spectrum and devices were available. In the meantime, it said it was pushing ahead with plans to deploy LTE in the 800MHz band "as quickly as possible".

Enrique Blanco, CTO Telefónica, said: "Telefónica is making fast progress toward building a network designed with the future in mind. Carrier aggregation represents one of the most efficient ways to leverage our spectrum, increase capacity and substantially enhance quality of service."

Finally, Telefónica will demonstrate full-duplex technology in a trial with Kumu Networks. The technology, which the operator said will be central to forthcoming 5G networks, cancels self-interference, which it said would allow a radio to transmit and receive on the same frequency for the first time.