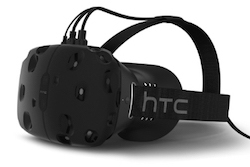 MWC 2015 has kicked off with a deluge of device launches, including a new virtual reality headset from HTC developed in partnership with video game developer Valve.

Announced alongside the company’s new One M9 smartphone during its MWC keynote address, the HTC Vive will be launched in beta in the first quarter of 2015 and features two 1200 x 1080 displays running at a rate of 90 frames per second.

The headset also features what HTC labelled a “full room scale 360 degree solution” which, when combined with tracking controllers, allows the wearer to walk about in their virtual space.

HTC revealed that beta versions and a developer edition were already undergoing trials with game developers, with a consumer unit expected to land by the end of 2015.

Cher Wang, Chairwoman of HTC, said: "Vive creates an exciting opportunity for all developers and content creators, to help us bring virtual reality into the mainstream with an end-to-end solution that completely redefines how we entertain ourselves, communicate with each other, learn and, eventually, how we become more productive.”

Rival manufacturer Samsung used the opening day of Mobile World Congress to introduce a new version of its own VR headset.

The Gear VR Innovator Edition features a 5.1-inch Super AMOLED display and has been optimised for use with the company’s new Galaxy S6 smartphones, which were also announced at MWC.

The headset, which features accelerator, gyrometer, geomagnetic, and proximity sensors, has been developed in partnership with Oculus VR, which will offer content for the headset through its store.

Samsung unveiled two versions of its latest flagship smartphone during the company’s Congress keynote, the Galaxy S6 and S6 Edge.

Both versions feature 64-bit octa-core Exynos 720 CPUs, built using the manufacturer’s new 14mn FinFET process, with the only discernible difference between the pair being the curved display of the S6 Edge.

Samsung also revealed that the devices had built on an upgraded version of its secure KNOX mobile platform, making them suitable for “immediate enterprise adoption”, according to the company.

Meanwhile, there were new wearables on display from Huawei and LG, with China-based Huawei revealing its new activity-tracking TalkBand B2 smartband and Korean neighbour LG demonstrating its new LG Watch Urbane and Watch Urbane LTE devices.