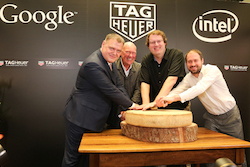 Apple Watch has a potential rival on its hands after it was revealed that Google and Intel are developing a high-end smartwatch with Swiss timepiece manufacturer TAG Heuer.

Announcing the collaboration during the Baselworld watch and jewellery show in Switzerland, execs from the three companies took to the stage to reveal that they were creating a “luxury” smartwatch based on the Android Wear platform.

The device, which is expected to hit the market before the end of 2015, is widely seen as a direct response to Apple’s recently-launched smartwatch and will be the first Android Wear device aimed at the luxury market.

David Singleton, Director of Engineering for Android Wear, said: “By fusing beauty with technology, the Swiss watch has inspired generations of artists and engineers alike—including us at Google. We’re thrilled to be working with TAG Heuer and Intel to bring a unique blend of emotion and innovation to the luxury market.

Recent stabs toward the higher end of the Android Wear smartwatch market include the LG Watch Urbane, which features an all-metal design and was launched during Mobile World Congress earlier this month.

“Together, and using the Android Wear platform, we can imagine a better, beautiful, smarter watch."

Ben Wood, Chief of Research, CCS Insight, said that the decision to announce the device at Baselworld rather than MWC would allow the companies to target traditional sales channels that offered the exclusivity and customer service that mobile retailers lacked.

He added that the partnership between TAG Heuer, Google and Intel would likely be the “first of many” collaborations between technology companies and traditional watchmakers looking to capitalise on the growing smartwatch market.

Wood said: “The palpable buzz around the Apple Watch has raised consumer awareness levels to a point that traditional watchmakers can no longer ignore this emerging opportunity.

“Smartwatches are turning out to be the hottest news coming out of the Baselworld luxury goods show. With Apple Watch hitting the market it’s no longer viable for Swiss watchmakers to bury their heads in the sand. Now Tag Heuer has signalled its intention to enter the smartwatch market, we are certain others will follow”.

Baselworld saw a number of smartwatches from seasoned watchmakers and startups alike, including an NFC-enabled timepiece from Bulgari and a device from Korean startup Kairos that overlays a mechanical watchface with an OLED interface.

Apple Watch highlights divide over the role of wearables