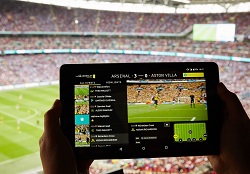 EE has held the latest demonstration of LTE broadcast technology in the UK at this weekend's FA Cup final, offering viewers a choice of camera angles and replays via tablets.

Members of the crowd with compatible tablets and a custom-made 4G Broadcast EE app, which was built by app company Intellicore, were able to switch between the pitch and broadcaster's footage on their device. They could watch the game, which saw Arsenal beat Aston Villa 4-0, via multiple camera angles and a range of replays.

The app also provided viewers with a range of constantly updated match statistics from Opta, as well as the option to ask questions about the match.

EE used evolved Multimedia Broadcast Multicast Service technology to enable the streaming. It makes video content live to everyone in the same place, meaning viewers are not hamstrung by buffering.

Matt Stagg, Head of Video at EE, and founder of the Mobile Video Alliance, said: “Momentum is growing around 4G Broadcast as companies from mobile, from broadcast and from content industries recognise how it can finally be the way to more efficiently deliver a truly great TV experience to large numbers of mobile viewers. This wasn’t possible with 3G, but it is part of the 4G roadmap and we’re investing in this innovation to give customers a great mobile video experience, wherever they are.”

The operator worked with a range of partners on the demonstration. BBC Sport provided three live streams and used its own Stagebox technology to transfer them from an outside broadcast truck to EE's network in real-time.

EE, Qualcomm and Huawei all worked together to enable LTE broadcast at last year's Commonwealth Games in Glasgow.