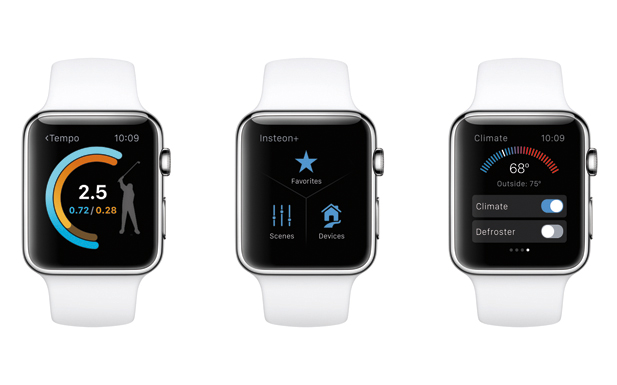 Apple has previewed new software for its Watch and iPhone devices during its annual Worldwide Developers Conference.

watchOS 2 builds on the March launch of Apple Watch.

New software APIs for video and audio playback have been made available to developers, Apple said.

The company has also introduced new features for end-users, including enhanced support for Apple Pay and third-party apps, as well as an “Activation Lock” allowing users to secure their device and prevent others from gaining access to it.

Support for Transit in Maps has been added, allowing users to view detailed information on public transport systems.

CSS Insight Analyst Geoff Blaber said: “The updates to the Apple Watch OS, particularly the support of native apps, address some of the early shortcomings around performance.

“Apple has listened to feedback and added a range of new capabilities that should greatly enhance the breadth and depth of apps.”

Much like watchOS 2, iOS 9 will also bring detailed transit information for metropolitan areas to the Maps app.

According to Blaber, while iOS 9 offers only an iterative step-up from iOS 8, the update puts Apple in a better position to compete with Google’s upcoming Android

He explained: “iOS 9 is an iterative release following two substantial updates in iOS7 and iOS8 to focus on stability and polish. Nonetheless, [updates to Siri] addresses a shortcoming in contextual information and seeks to take the fight to Google Now in both relevancy and ideology.

"HomeKit featured less prominently than expected but Apple is laying the foundations for wider support in future. Examples included a broader range of sensors, integration with Siri and support within Apple Watch apps.”

Apple’s upcoming iPhone OS will arrive in autumn alongside watchOS 2 and, presumably, new hardware from Cupertino.

Finally, the company revealed Apple Pay will land in the UK in July.