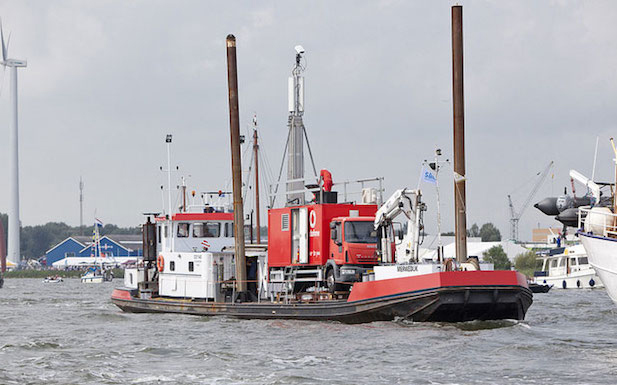 Vodafone Netherlands has created what it labels a “floating base station” for the SAIL Amsterdam event.

The operator placed a truck containing a 4G base station, dubbed “a cell on wheels”, on a utility boat that sailed around the harbour throughout the annual event, providing additional capacity to spectators.

The base station was equipped with an experimental 360-degree swivelling transmission link, which allowed it to transmit traffic to Vodafone’s regular network.

Meanwhile, Non-Line-of-Sight (NLOS) equipment was used on the vessel to ensure that movements of the antennas, which normally have to be precisely aligned to maintain connections, did not affect data transmission.

Vodafone said it was able to boost network capacity in the surrounding area capacity by 50 percent as a result, delivering LTE coverage to some 2.5 million attendees over the 1800MHz spectrum.

The solution was devised alongside AAA, Ericsson and backhaul provider SIAE Microelettronica.

Matthias Sauder, Chief Network Officer of Vodafone Netherlands, said such technology could be used to enhance the performance of the operator’s day-to-day networks.

Sauder said: “Our network needed extra capacity so that our customers could keep on calling, texting and sharing photos of the 44 class-A tall ships and thousands of smaller craft during the event.

“Extending 4G coverage across the harbour area was particularly challenging because of the density of crowds.

“The mast transmitted 4G coverage using 1800 MHz spectrum meaning there was high capacity over a relatively small distance. Since the boat was close to the users, it was an ideal vessel (no pun intended) to provide a great service.”

Vodafone is no stranger to unconventional technology solutions.

In the UK, the operator has developed a mini mobile antenna designed to look like a bird box, aimed at improving covering in rural areas without ruining the charm of local surroundings.