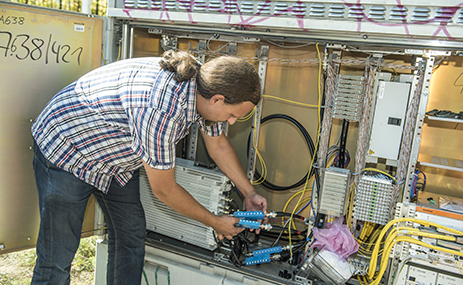 Deutsche Telekom has hit speeds of 1.22GBps on its live network during a technology demonstration with Huawei.

The operator used 4x4MIMO and debuted five band carrier aggregation in the test in Berlin, as well as a conventional LTE base station and small cell.

It builds upon a test both telcos held last year, which aggregated three bands to hit speeds of more than 340MBps.

Deutsche Telekom said the achievement is crucial as the industry moves from LTE towards 5G and consumers stream more content and data rich games on their smart devices.

The Germany-based company joins an increasingly populated group of operators, including its Polish subsidiary, that have broken through the 1GBps barrier. Finnish operator Elisa is closing in on the 2GBps benchmark.

Claudia Nemat, Deutsche Telekom AG's Board Member for Europe and Technology, said: "User behaviour is evolving rapidly on the way to a gigabit society. That's why fast internet access can't be limited to just fixed lines and fiber optics – our customers also want the highest possible speeds for maximum comfort on the go as well. As you can see, our network delivers. We are ahead of our time and ahead of the competition."

Lin Baifeng, President, Huawei Deutsche Telekom Key Account, added: "Huawei strongly believes in the best user experience as the foundation for the successful future of Deutsche Telekom. Together we innovate for the advanced wireless technology and Huawei is happy to support Deutsche Telekom to prove the benefits of the latest evolutionary step of this technology, LTE Advanced Pro, in real field application."