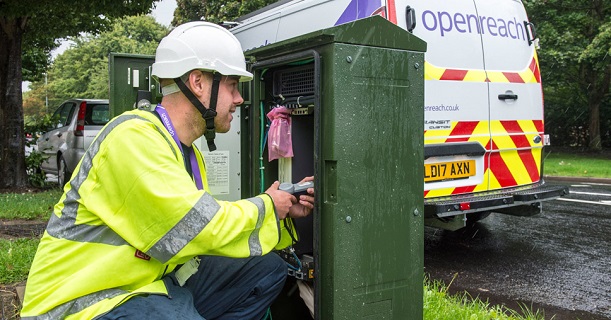 The company is asking its wholesale customers such as Sky, TalkTalk and BT (which owns Openreach) for input on how to best to upgrade its retail customers from copper connections onto faster Fibre-to-the-Premises (FTTP) technology, which it is building throughout the country.

Richard Allwood, Chief Strategy Officer, Openreach, said, “Unlike the move to digital TV, the process of upgrading broadband connections to ‘full fibre’ will require physical fibre connections to be made to individual premises, and involve significant investment from Openreach and support from communications providers.

“But the transition will also deliver huge benefits to the [telecoms] industry and UK in general, providing greater broadband speeds and reliability, a significant boost to productivity and competitiveness, and a digital platform that’s expected to serve homes and businesses here for many decades to come.”

CSPs are being asked for input on how to build the new network, how the industry should migrate customers smoothly onto the Openreach network, once it’s built, and how the copper network should  be retired.

The UK government has stressed that a national full fibre broadband network underpins its Industrial Strategy.

Last week at the FTTH Council Europe Conference in Amsterdam, Greg Mesch, Co-founder and CEO of Openreach's rival CityFibre, said as part of a panel discussion on the UK's infrastruture, "the whole copper-to-fibre switch is fake…It was invented in the mind of incumbents to try and figure out a way to take the revenue base that exists on copper and keep it all for [themselves].

Openreach has outlined a number of guiding principles, which it believes are crucial to achieving a successful transition. They include:

• Upgrading the large majority of people voluntarily, whilst developing an industry process for late adopters

• Developing a consumer charter with industry and Ofcom that encourages transparent communications to homes and businesses affected, and includes protections for vulnerable customers.

Openreach is on track to deliver fibre-to-the-premises FTTP broadband to 3 million homes and businesses by the end of 2020 but says it wants to further and reach more than 10 million.

Allwood said, “Agreeing an approach to this upgrade process is a key enabler to deliver that larger ambition, and to bring the UK closer to the Government’s aim of nationwide FTTP network by 2033. [We] will be speaking to the Government, Ofcom and key consumer, business and public sector groups as part of the consultation process.”