However, despite increased unit shipments microwave revenue growth to 2016 would be slow, with the microwave market in 2016 worth only slightly more than in 2011. 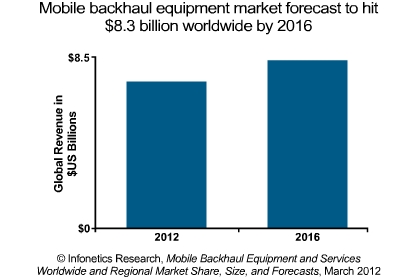 s well as packet microwave, China was also a key driver in 2011. "The nice bump up in the mobile backhaul market in 2011 was due in large part to a surge in Ethernet mobile backhaul router purchases in China," Michael Howard, principal analyst and co-founder of Infonetics Research, said. "We expect the China surge to subside in 2012, impacting the overall market; then slow, steady growth in this already-large market should resume in 2013." Infonetics forecasts a cumulative $39 billion will be spent on mobile backhaul equipment over the 5 years from 2012 to 2016.Info

Microwave down overall, but all-IP grows

For the full year 2011, the microwave equipment market was down 6% to $5.3 billion. Although unit shipments increased, revenues were hit by rapidly declining TDM equipment sales and price erosion in the hybrid TDM/Ethernet segment.

Despite overall sluggishness, sales of all-packet Ethernet microwave gear were up 19% for the year, and up 13% from the year-ago 4th quarter. As a result, Infonetics forecasts Ethernet-only microwave equipment to grow nearly 5-fold from 2011 to 2016. The overall global microwave equipment market (including TDM, hybrid, and Ethernet-only equipment) will remain flat, though, and is forecast by Infonetics to total $5.6 billion in 2016 — only marginally more than 2011's revenues of $5.3 billion.

About 150 mobile operators are actively deploying IP/Ethernet backhaul, up from 100 in 2010 and 25 in 2009, Infonetics said. That growth means that IP/Ethernet equipment makes up more than 90% of all mobile backhaul equipment spending, driven by operators looking to lower mobile data traffic costs, accommodate the 3G mobile broadband data transition, and move to IP as the basic technology of LTE (and WiMAX).

"In 2011 Clearwire shifted from its nationwide WiMAX rollout in the US — for which it heavily invested in millimeter wave in 2010 for short-distance backhaul — to prepare for a transition to LTE. This resulted in a steep decline in the millimeter wave market in 2011," Webb said.

However, the analyst expects to see a 63% compound annual growth rate for millimeter wave equipment revenue from 2011 to 2016. The market will be driven by wider availability of licensed and unlicensed millimeter wave products and as 4G network deployment increased the demand for high capacity mobile backhaul solutions for metro areas with high cell density.