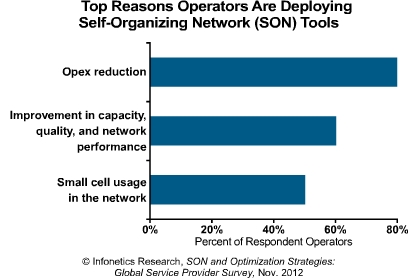 Infonetics analyst Stéphane Téral has confirmed, in a recent report, that mobile operators are increasingly deploying SON techniques - written into the 3GPP standards at LTE level - to help them manage their 3G networks.

Téral interviewed operators for his latest market survey: SON and Optimization Strategies: Global Service Provider Survey. He found that while SON is up and running in a few LTE networks around the world, some of the large incumbents have deployed SON as the key optimization tool in their 3G networks as well.

The analyst said he was "surprised" by the finding. "Since SON was originally developed for LTE, this finding is fascinating and draws to a close the debate over whether SON could be used in legacy networks," he said.
Infonetics said operators are deploying SON for opex reduction and improvements in capacity, quality and network performance. Increasing small cell usage in the network is also a driver.
The most common SON feature in operation is ANR (Automatic Neighbour Relations), with Ericsson, Huawei and NSN as the top vendors. 80% of respondents rate complexity as the number one barrier for deploying SON, and a majority also consider SON as an immature and unproven technology.
LTE Small Cells