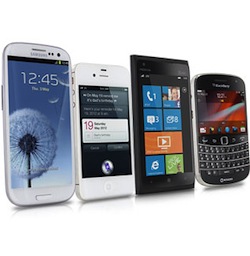 Research firm IDC has forecast that, for the first time ever, more smartphones will be shipped globally than feature phones in 2013.

While much of the world’s smartphone shipments to date have been a direct result of demands in mature economies in the US and the UK, other countries are rapidly rising up the ranks, with the top five countries for smartphone shipments and market share now seeing China in the top place, with USA and the UK in second and third spots respectively, and Japan and Brazil bringing up the rear in fourth and fifth place.

"While we don't expect China's smartphone growth to maintain the pace of a runaway train as it has over the last two years, there continue to be big drivers to keep the market growing as it leads the way to ever-lower smartphone prices and the country's transition to 4G networks is only just beginning," said Melissa Chau, Senior Research Manager, IDC Asia/Pacific.

"Even as China starts to mature, there remains enormous untapped potential in other emerging markets like India, where we expect less than half of all phones shipped there to be smartphones by 2017, and yet it will weigh in as the world's third largest market."

India, which was placed sixth in IDC’s ranking for smartphone shipments and market share, is expected to have the greatest year-on-year smartphone shipment growth amongst the top countries “by a wide margin”, according to IDC, due to the fact that there will be greater incentives and low-cost devices as vendors aim to convert the population from using feature phones.

In the US, slower growth is expected in the smartphones market, but the operating system landscape may still shift as BlackBerry and Windows Phone look to eat into Android and iOS.

In the UK and Brazil, smartphone markets are still expected to grow with the continued transition to 4G LTE networks.

“Brazilians have yet to turn in their feature phones for smartphones on a wholesale basis," said IDC Brazil’s Consumer Devices Research Manager Bruno Freitas in a statement.

"The smartphone tide is turning in Brazil though, as wireless service providers and the government have laid the groundwork for a strong smartphone foundation that mobile phone manufacturers can build upon."