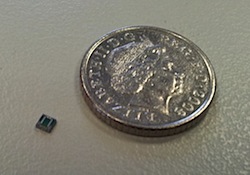 Sofant Technologies has secured institutional funding for its pioneering smart antenna device with the help of Kelvin Capital, Scottish Enterprise and the investment arm of The University of Edinburgh.

The funding will help Sofant to roll out product development plans and licence its designs to smartphone manufacturers.

COO Ahmed El-Rayis told Mobile Europe that it is the first time that the antenna will be used as a smart device which responds effectively to the available signals and optimises smartphone performance to reduce energy.

“A key enabler for Sofant’s solutions is its novel proprietary RF MEMS technology. The switches are ultra low power, smaller and more reliable than any other MEMS switch on the market,” he explained.

“Sofant’s switches are unique as they are based on its patented SUMTM technology. This allows high capacitance range and reliability. Tunable RF modules are key to enhancing the antenna reception on mobile devices and battery life saving.”

“In terms of infrastructure, having Sofant technology on the mobile devices will allow the network operators to save tens of millions of dollars from extra base stations and extra infrastructure,” he claimed.

Smart antenna technology is forecast to be worth €1.8 billion by 2020.