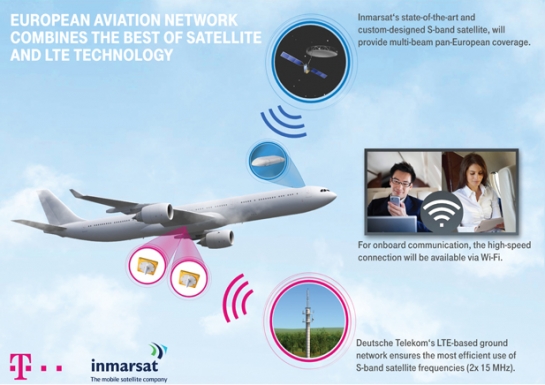 The partnership, which was announced last September, will allow passengers to browse the internet by using satellite connectivity provided by Inmarsat and an LTE-based network on the ground that Deutsche Telekom will run.

The operator is aiming to build 300 LTE sites across Europe, with the first sites identified in the south-west of the United Kingdom.

Trials were originally suggested for next year with Lufthansa the first airline to test it. However, trials have been brought forward to the end of this year, the first step in a phased rollout.

The commercial pilot will now take place in March 2017, with coverage set to be extended across Germany and other parts of Western Europe by the middle of next year.

The two companies have set a target of early 2018 for the commercial launch, when full coverage will be enabled across Europe.

Claudia Nemat, Board Member Europe and Technology, said, "We made a promise to deliver together with our partner Inmarsat the world's first hybrid network dedicated to aviation passenger connectivity in Europe with a customer experience similar to the comfort of high-speed broadband at home. We already started with the preparations for the trials now to deliver upon this ambitious technological challenge."

She added: "We will roll out our new LTE network across multiple countries in parallel, supported by Deutsche Telekom's national companies and our local T-Systems business units, as we deliver another cutting-edge service to customers in Europe. A speedy implementation is important to us and in this regard, we are benefiting from our broad international footprint and many years of experience in international and cross-functional cooperation across the Group."