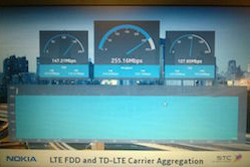 Nokia and Saudi-Arabian operator STC have conducted the first trial of TDD/FDD carrier aggregation in the region using a commercial chipset.

Hani Dib, head of STC customer team at Nokia Networks, commented: “We believe that the optimal use of spectrum is key to satisfy ever-increasing subscriber demand for network capacity and speed.

“Our achievement with STC will encourage other operators globally to look at this kind of spectrum convergence to save costs and increase throughput.”

Nokia has recently been involved in a number of carrier aggregation projects.

Last week, the vendor claimed it had hit data speeds of 4.1Gbps using TD-LTE/FDD carrier aggregation in a trial with China Mobile and Ooredoo Qatar.

In November, Nokia saw peak data rates of over 200Mbps in a test of carrier aggregation through small cells.

The vendor has previously said that trials of carrier aggregation were key to speeding up the deployment of LTE-A networks.