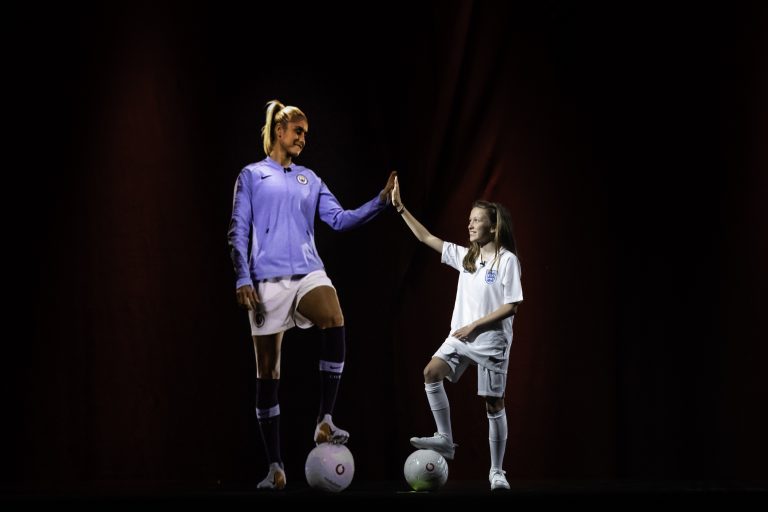 Vodafone UK has announced plans to switch on 1,000 5G sites by 2020, as the operator seeks to position itself as leading the country towards the next generation of mobile technology.

Vodafone reiterated its intention to trial 5G in seven cities from next month, and revealed plans to commercially launch 5G services in Cornwall and the Lake District in 2019.

The company also offered a tantalising glimpse of what 5G promises to deliver, demonstrating a live holographic 5G call between Vodafone's Manchester office and its headquarters in Newbury. The demo saw England and Manchester City women's football captain Steph Houghton appear as a hologram on stage in Newbury to give tips and advice to a young football fan.

Last week Vodafone said it plans to double its number of NB-IoT sites in Europe.

Vodafone's narrowband IoT (NB-IoT) network is also one of the cornerstones of its refreshed UK SME services portfolio, which now also includes a so-called 'self-optimising' tariff that automatically switches business customers to the bundle they are most suited to.

Vodafone also launched a series of initiatives for the UK aimed at spurring digital entrepreneurship, one of which is an award for innovative technology with a social purpose, called Techstarter. Vodafone also unveiled a mentorship programme – called Bright Sparks – in partnership with Oxford University Innovation.

Vodafone's frontline staff will also be offered free coding courses; the company has also partnered with the University of Birmingham to offer a study programme that combines a computer science degree with a Vodafone tech apprenticeship.

"The initiatives we've launched today are designed to ensure that everyone can benefit from the digital technologies transforming how we live and work," Jeffery said. "From our customers and employees, to university students, digital entrepreneurs and businesses, we want to help people across the UK get ready for a digital future."