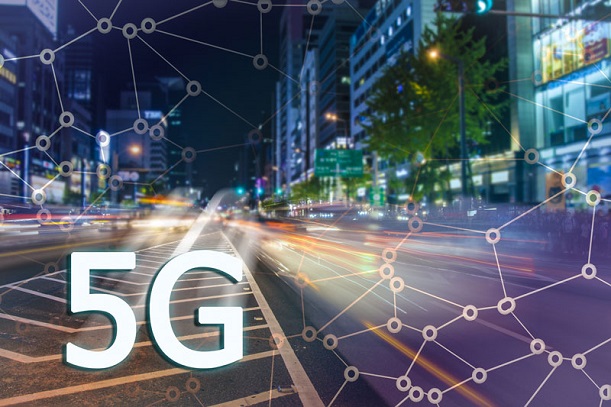 5G’s success is tied to the speed, reliability and capacity of the other networks it will complement and augment, including 4G, but most especially fibre. Almost half of the respondents who work for operators said sufficient fibre is the top critical factor for 5G’s success.

Franco Bassanini, President of Italy’s Open Fibre, said fibre and 5G would form “dual-faced networks of [fibre to the home] FTTH-5G” at the FTTH Conference, held in Amsterdam in March. This is because fibre will be needed to provide sufficiently fast front and backhaul for 5G at all the radio access network sites, including small cell sites that will be needed to provide, for instance, indoor coverage.

Allison Kirkby, CEO of Denmark’s TDC, insisted the two are “supplementary, not complementary – 5G will add to fibre, not replace it,” she said, but acknowledged that 5G could also “be ‘air fibre’ for the last mile” in some places.

Given this inter-dependence of 5G and fibre, and how long the operators have been planning for 5G, the low fibre penetration within some of Europe’s biggest economies is surprising. Belgium is not even on the list. Germany, Europe’s biggest economy by far, is thirtieth out of the 34, while the UK only just met the criteria for inclusion, largely due to the efforts of alternative, fibre-only network builders like CityFibre and Hyperoptic, not Openreach, BT’s access business.

Spain’s tremendous progress stands out, given how badly it suffered after the global financial crisis that started in 2007. This is mostly due to two factors. Emmanuel Lugagne Delpon, CTO, Orange Group, noted that Spain’s regulator behaved “more like the US and let the incumbent [Telefónica] run with [fibre deployment] and no restrictions, and that encouraged the others.”

Secondly, fibre is core to Telefónica’s growth strategy of delivering unique content such as video, e-sport and gaming over super-fast broadband.

“We don’t sell FTTH, we sell Wi-Fi, experience and services,” said Enrique Blanco, CTIO of Telefónica Group. He claimed the company overall is number one for fibre deployment in Europe and Latin America and that 44% of Telefónica’s customers have broadband speeds of more than 50Mbps. 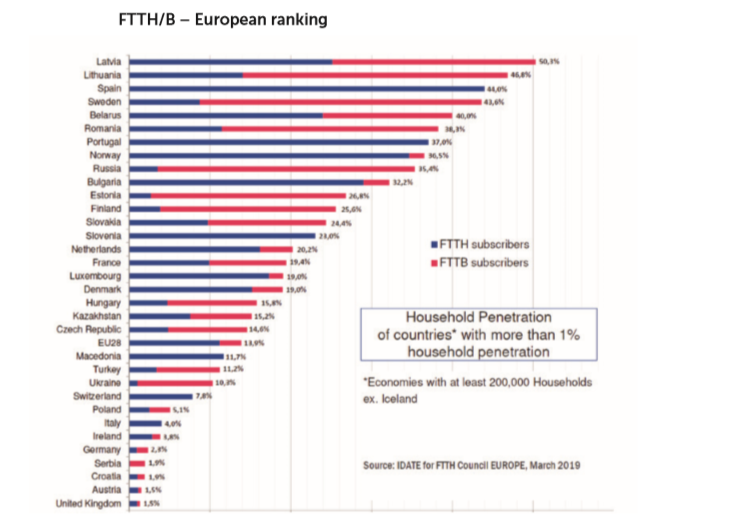 Scale is the key

For instance, in Brazil customers are quick to complain if their line speed drops below 60-70Mbps. Blanco commented wryly, “We have changed their mindset” and said scale and experience are important: “We are building a FTTH machine that we control from end to end. We can cut the cost of passing homes and the number of complaints with this machine”.

There are other factors to consider about the Council’s ranking, such as it takes no account of extensive cable networks in some countries, which until surprisingly recently some operators argued was a good-enough substitute for fibre. Nor does the ranking include fibre to the kerb or the cabinet: indeed, the FTTH Council has strong views about hybrid solutions being marketed as ‘fibre’, describing them as “fake fibre”.

4G coverage and capacity is also beyond the scope of the ranking, although it will be key to 5G’s progress. When EE announced it would be the first to deploy 5G in the UK, from the end of May, Kester Mann, Principal Analyst with CCS Insight, said, “EE’s [statement] highlighted that the shift from 4G to 5G is an evolutionary one”. He added, “The UK will have completed a remarkable turnaround…In 2012, it became only the fifty-third nation to launch 4G. Now, with all four networks planning to go live in 2019, it can justifiably claim to be one of the world’s 5G pace-setters.”

It is not surprising many operators have put off deploying fibre as it is hugely expensive. Many operators have staggering levels of debt, and most are judged on quarterly results, although making money from huge infrastructure investments is a long-term play.

To add to their woes, operators are being forced to spend eye-watering amounts to win 5G spectrum in some national auctions. Italy’s raised more than €6 billion and Germany’s has already hit that milestone and is ongoing, and many more are yet to come. On top of all this, they are facing the high costs of building out 5G infrastructure.

On the last point, the European Commission, FTTH Council and others argue that the costs are not well understood and could be substantially less than feared through the intelligent alignment of fibre and 5G infrastructure. The FTTH Council Europe’s recent quantitative study, 5G and FTTH: The Value of Convergence, makes cheerier reading than the ITRE report. It found that “between 65% and 96% of fibre costs for 5G X-haul can be eliminated by rolling out an optimised and ‘future-proof’, converged fibre network”. It claims, “In some cases, the cost for fibre to 5G can be virtually eliminated, which can potentially decrease the total cost of 5G by in the order of 50%.

The extra investment needed to immediately make an FTTH network ready for 5G (even for high density of cells) is only 1% to 7%.” Not everyone will agree with the models and assumptions behind these claims, but they are food for thought.

Finally, infrastructure sharing is another pragmatic approach to cutting costs and one that is gaining momentum.

Telefonica Group’s CEO, Jose Maria Alvarez-Pallete, pointed out in May that 80% of capex and 20% of opex in network build-outs goes on infrastructure sites and transmission rentals. In January, Telefónica and Vodafone in the UK said they’d expand their network sharing arrangements to include 5G sites: In February Vodafone and TIM said they would look into combining their 22,000 passive towers in Italy into a single entity to support 5G active network sharing, and will consider active sharing for 4G. The agreement looks likely to be extended to Iliad. In April, Orange and Vodafone announced they would extend their network sharing in Spain to 5G.

There are other examples and it looks certain that there will be many more to support 5G.