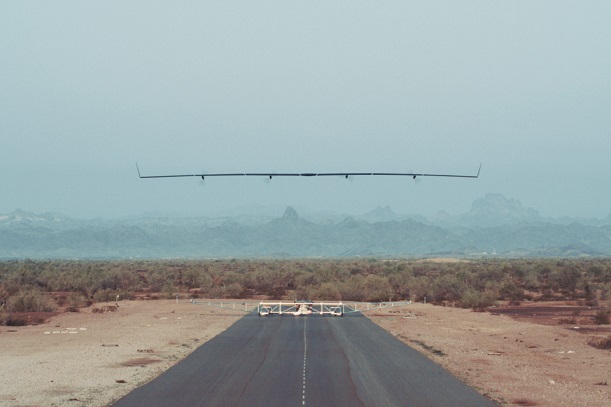 Facebook’s telco drone Aquila has made its maiden test flight, as the social network gets one step closer to delivering wireless connectivity.

Aquila is a solar powered drone that beams wireless connectivity using lasers and millimetre waves. Facebook said it can circle a region of up to 60 miles in diameter for up to three months at a time. It said its power consumption was the equivalent of a high-end microwave.

Facebook had been trialling a one-fifth scale version but last week debuted the full scale model. It verified aerodynamics, batteries, control systems and crew training during the 90 minute flight.

A series of tests will follow in the coming months, with the intention to fly the drone faster, for longer periods of time and higher, ultimately above 60,000 feet.

Jay Parikh, Global Head of Engineering and Infrastructure, said: “We’re encouraged by this first successful flight, but we have a lot of work ahead of us. In fact, to reach our goal of being able to fly over a remote region and deliver connectivity for up to three months at time, we will need to break the world record for solar-powered unmanned flight, which currently stands at two weeks.

This will require significant advancements in science and engineering to achieve. It will also require us to work closely with operators, governments and other partners to deploy these aircraft in the regions where they’ll be most effective.”

Aquila is a central part of Internet.Org, Facebook’s attempts to connect remote parts of the world. Earlier this month, Facebook launched OpenCellular, an open source wireless access platform. Field trials of the technology are expected in the coming months.