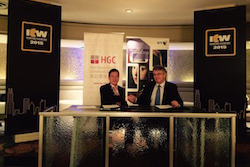 BT and Hutchinson Global Communications will interconnect their IP packet exchange (IPX) networks to help extend the reach of fixed and mobile services and facilitate technology such as VoLTE.

The agreement will allow the operators to extend coverage across Europe and Asia, further enabling services such as mobile signalling and 2G, 3G and 4G data roaming for MNOs served by the network.

As well as VoIP services, the companies said the IPX interconnect agreement would also help enable “future” IP services such as HD video calling and VoLTE.

Additionally, MNOs linking to roaming and inter-networking partners over the IPX network will be able to better manage traffic from data-intensive services, the operators claimed.

Andrew Kwok, HGC’s President of International and Carrier Business, said: “The collaboration with BT highlights our unrelenting efforts to extend Hutch-IPX coverage and partnership globally. This collaboration will enable MNOs and other operator customers to deliver traffic through our global network extending from Asia to Americas, Europe, the Middle East and Africa.”

Andrew Dodsworth, VP of Global Telecom Markets at BT, said the agreement would allow BT to extend its reach into Asia.