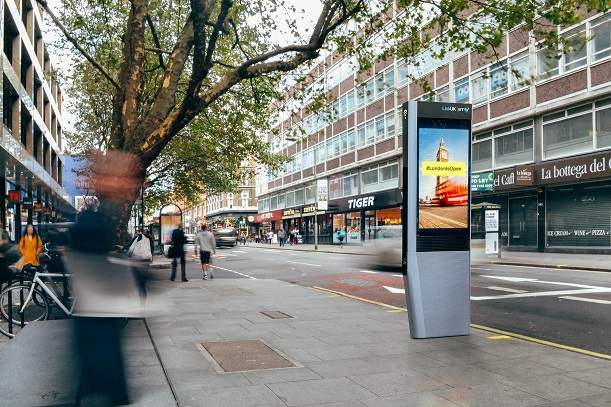 BT is bringing free Wi-Fi with speeds of up to 1GBps to London as it looks to build new-look phone booths offering a range of services.

The initiative, dubbed LinkUK, will be supported by digital advertising and will roll out across London next year. The kiosks will feature on high streets across the UK’s capital and will also offer free mobile and landline calls, device charging and access to maps and local services.

Sensors on the kiosks can capture real-time data related to temperature, air and noise pollution, temperature and traffic conditions.

As well as a touchscreen tablet that will give consumers access to various services, the kiosks will feature two 55″ HD digital displays that will make public service announcements and advertising.

Camden, in north London, will host the first kiosks, with up to 100 set to be introduced next year. At least 750 kiosks will be installed across London and in major UK cities over the coming years. The kiosks will replace existing BT phone booths.

Gerry McQuade, CEO, BT Wholesale and Ventures, said: “We’re evolving the phone box to make it relevant in the 21st century by offering people ultrafast Wi-Fi and a range of digital and information services entirely for free.

“London is one of the greatest cities in the world and it’s entirely fitting that it becomes the first UK city to benefit from the Links. But we will be rolling out many more Links to the other great cities across the UK over the coming months as we look to transform the look and functionality of our public payphones.”

BT is working with Intersection, the company behind the Link kiosks, on the project. Earlier this year, Intersection launched Link kiosks across New York.