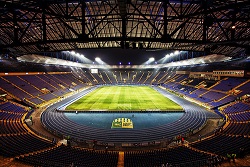 Ericsson and Polish operator Polkomtel have carried out the country’s first successful trial of LTE Broadcast.

The test took place during the opening match of the FIVB Volleyball Men’s World Championship in Warsaw’s National Stadium, where the game was streamed to approximately 300 people with LTE Broadcast-enabled devices.

Tobias Solorz, President of the Management Board at Polkomtel, said: “We are very pleased with the outcome and look forward to a thorough evaluation of the results.

“This successful test opens up the possibility of providing high-quality streams of sporting events and other programming to our subscribers, and we hope to offer this kind of service all over Poland in due course.”

Polkomtel is one of Poland’s biggest operators, serving over 13 million subscribers.

Video traffic is expected to grow about 60 percent every year until the end of 2018. In Europe, EE, Three UK, Orange, KPN and Vodafone Germany have all made recent announcements in LTE Broadcast.

In June, EE undertook its first live trials of the technology at the Commonwealth Games in Scotland, meanwhile the previous month KPN carried out its first test during a football match in the Netherlands.

The news comes on the same day Ericsson-LG announced an R&D collaboration with SK Telecom on the Swedish vendor’s cloud orchestration technology.

The joint venture aims to explore further ways of developing technologies such as NFV, cloud and SDN that it is hoped will help providers achieve maximum network efficiency when 5G networks eventually roll out.

Park Jin-hyo, Head of Network Technology R&D Centre at SK Telecom, said: “Orchestration of integrated network services is a key for the next-generation 5G network. It is an essential technology to maximise efficiency and automation of increasingly advanced and complex networks, and revitalise a 5G network service ecosystem based on a user-centric, open network.”

LTE Broadcast gains traction with operators around the world

Delays in freeing up 800MHz are slowing down EU 4G market