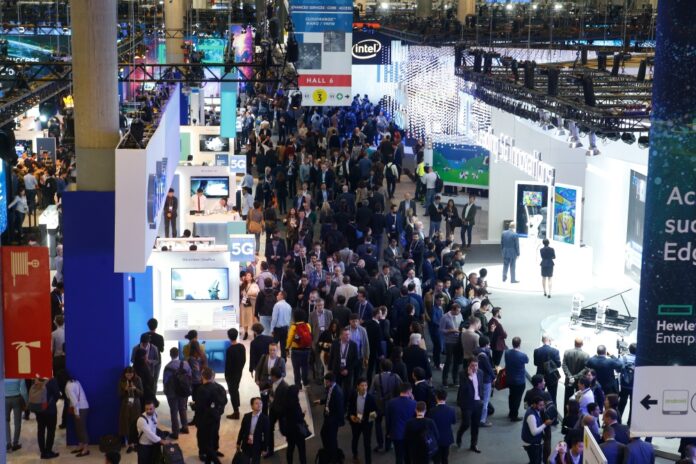 The Swedish vendor was the first major exhibitor to exit last year’s event which was ultimately cancelled.

Ericsson is opting out GSMA’s flagship Mobile World Congress which is held annually in Barcelona and where it is usually one of the major exhibitors.

This year the event was moved from its usual slot in February to the end of June because of the corona virus which caused the event to be cancelled last year.

Ericsson’s exit will be a blow to the GSMA which yesterday outlined how it will manage the risk of Covid-19 at the event.

Measures include providing rapid testing centres, and requiring attendees to wear masks and provide a negative test result to access the venue. All participants will have to take a new test every 72 hours during the conference.

The GSMA’s senior execs have said, possibly somewhat optimistically, that they will restrict the number of visitors to 50,000. Pre-pandemic, the event attracted double that number – the picture is from the 2019 event.

Like last year, Ericsson stressed the welfare of its employees is its top priority, and its decision precautionary. It said it looked forward to being at future events and working closely with the GSMA and industry partners, pointing to the progress of vaccination programmes.

The pandemic has killed more than 2.6 million people and many countries are experiencing surges in infection rates, and have travel restrictions in place. This includes the European Union, to which Spain belongs.

Currently the EU only admitting visitors from Australia, New Zealand, Rwanda, Singapore, South Korea, and Thailand. How this will change by the time the event is due to take place is anyone’s guess in the face of billion awaiting vaccination and the rise of variant strains of the virus.

The extent to which travel restrictions might change between now and the MWC Barcelona conference dates remains unclear, particularly with concerns about new and more contagious variants of Covid-19 that are circulating globally.

Last September, the GSMA had announced a new schedule for its main events in Shanghai (moved to late February), Barcelona and Los Angeles, which it hoped would see the return of attendees to actual events.

Shanghai was held in late February and seems to have gone well with a restricted number of visitors.

GSMA Director General Mats Granryd in a statement, “Working together with the Shanghai authorities, we’ve just concluded the first in our MWC series in Shanghai. Our partners, exhibitors, board, and local businesses’ support was heartening, and everyone contributed to creating a safe environment by sticking to the safety measures.

“I am now looking forward to MWC21 Barcelona; it is time to bring together the mobile ecosystem in-person.”

The GSMA’s safety plans for the Barcelona event are outlined here. As the organisation notes, “Planning in a pandemic is complicated. Global circumstances remain dynamic, and so we must behave accordingly, which means constant evaluation and fine-tuning.”