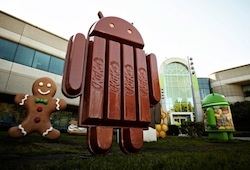 Google has beaten Facebook to acquire Titan Aerospace, a company specialising in solar-powered, pilotless drones that can remain airborne for years at a time, as the battle for finding new ways to deploy wireless internet hots up.

The New Mexico-based company has been developing two models of solar powered drone since 2012, the Solara 50 and Solara 60. In a statement on its website, Titan Aerospace said: “At Titan Aerospace, we’re passionate believers in the potential for technology (and in particular, atmospheric satellites) to improve people’s lives.

“It’s still early days for the technology we’re developing, and there are a lot of ways that we think we could help people, whether it’s providing internet connections in remote areas or helping monitor environmental damage like oil spills and deforestation.”

The acquisition will bolster Google’s Project Loon, which is a plan for a network of balloons positioned in the stratosphere bringing internet connectivity to areas previously lacking in coverage. The project began last year with 30 balloons released over New Zealand. This year it is planning to position a ring of balloons around the 40th southern parallel, bring connectivity to New Zealand, Australia, Chile, and Argentina.

Google beat its rival Facebook to the acquisition, as both companies look to the skies to bring connectivity to the masses. Facebook reportedly started talks with the company earlier this year, before opting to buy UK company Ascenta. It designs and builds aircraft that can stay at high altitudes for long periods of time. Facebook is eyeing drone and satellite technology as part of its Internet.org project, which aims to connect those in developing countries.